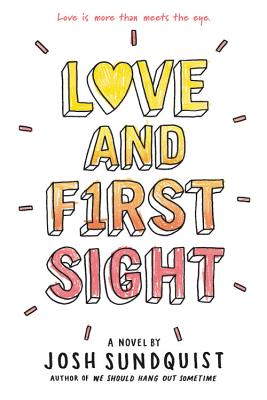 In his debut novel, YouTube personality and author of We Should Hang Out Sometime Josh Sundquist explores the nature of love, trust, and romantic attraction.

On his first day at a new school, blind sixteen-year-old Will Porter accidentally groped a girl on the stairs, sat on another student in the cafeteria, and somehow drove a classmate to tears. High school can only go up from here, right?

As Will starts to find his footing, he develops a crush on a charming, quiet girl named Cecily. Then an unprecedented opportunity arises: an experimental surgery that could give Will eyesight for the first time in his life. But learning to see is more difficult than Will ever imagined, and he soon discovers that the sighted world has been keeping secrets. It turns out Cecily doesn't meet traditional definitions of beauty--in fact, everything he'd heard about her appearance was a lie engineered by their so-called friends to get the two of them together. Does it matter what Cecily looks like? No, not really. But then why does Will feel so betrayed?

Told with humor and breathtaking poignancy, Love and First Sight is a story about how we relate to each other and the world around us.

Josh Sundquist is a Paralympic ski racer, cancer survivor, popular YouTube vlogger, motivational speaker, and Halloween enthusiast. Every Tuesday, Josh releases a new video to 200,000-plus subscribers on his YouTube channel. He is the author of We Should Hang Out Sometime and the bestselling Just Don't Fall. As a motivational speaker, Josh speaks to schools, conventions, and corporations across the world. He invites you to visit him online at joshsundquist.com or follow him at @JoshSundquist.

"Sensitively explores disability and its influence on identity...The juxtaposition of blindness with (not) judging by appearances is common, but the author gives depth to the trope by highlighting the betrayal Will feels at the exploitation of his blindness. Thought-provoking and insightful."—Kirkus Reviews

"Unique...Readers will enjoy the humor and romance of the story while gaining a better understanding of life with a visual disability...A highly recommended and engaging story for most YA collections."—SLJ

"Sundquist writes eloquently about what it might be like for someone who was born blind to be given sight...thoughtful and evocative...providing readers with a fresh perspective on how humans interact with each other and the world around them."—Publishers Weekly

"Rich in sensory detail, this novel pulls readers into Will's world. Sundquist deftly shows the difference between the act of seeing and truly seeing. This fresh and funny coming-of-age story presents an opportunity for readers who take certain abilities for granted to take stock of challenges facing peers."—Booklist

"Sundquist does a nice job of getting inside the head of a person who has absolutely no visual frames of reference...without it feeling intrusive or overly clinical. For budding scientists and future doctors, these details offer new thoughts as well as context for understanding the real stories of people gaining eyesight after blindness and then wishing they hadn't; even readers who just came for the romance will find themselves understanding the "tyranny of the visual" in new ways."—BCCB

"In his debut novel, memoirist Josh Sundquist proves he's as adept at making up new stories as he is at recounting his old ones as he explores overcoming adversity, seeing the world through fresh eyes (literally), and keeping a sense of humor in the midst of life's tribulations. An exciting new voice in the world of YA fiction."—Tommy Wallach, New York Times bestselling author of We All Looked Up

Praise for We Should Hang Out Sometime:An Amazon.ca Best Books of December 2014 for Children and Teens SelectionA YALSA 2015 Teens Top Ten Nominee2015 Goodreads Choice Awards Nominee"You should read this book sometime. I loved it so much!"—Justine Ezarik, New York Times bestselling author of I, Justine: An Analog Memoir