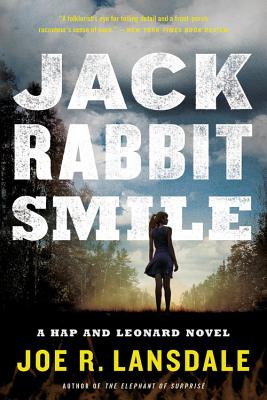 This is book number 11 in the Hap and Leonard series.

Edgar Award-winner and fan favorite Joe R. Lansdale is back with Hap and Leonard's latest caper: investigating the disappearance of a revivalist cult leader's daughter.

Hap and Leonard are an unlikely pair-Hap, a self-proclaimed white trash rebel, and Leonard, a tough-as-nails black gay Vietnam vet and Republican-but they're the closest friend either of them has in the world. Hap is celebrating his wedding to his longtime girlfriend, Brett (who is also Hap and Leonard's boss), when their backyard barbecue is interrupted by a couple of Pentecostal white supremacists. They're not too happy to see Leonard, and no one is happy to see them, but they have a problem and only Hap and Leonard will take the case.

With Lansdale's trademark humor, whip-smart dialogue, and plenty of ass-kicking adventures to be had, you won't want to miss Hap and Leonard's latest.

Joe R. Lansdale is the author of nearly four dozen novels, including Rusty Puppy, the Edgar-award winning The Bottoms, Sunset and Sawdust, and Leather Maiden. He has received nine Bram Stoker Awards, the American Mystery Award, the British Fantasy Award, and the Grinzane Cavour Prize for Literature. He lives with his family in Nacogdoches, Texas.

"Part of what makes this book exceptional is the way Lansdale portrays the long legacy of race and class discrimination as the characters' lived experience. . . . Lansdale is one of a kind, with a deceptively folksy and funny voice that hides real darkness; fans of the eponymous SundanceTV series will be delighted to find the books are even better."—Booklist (starred review)

"Fans of the books and Sundance TV series will eagerly follow the men through their latest, politically timely hullabaloo."—Library Journal

"A companionable, enjoyable, and profane series . . . Its pleasures are still welcome."—Kirkus Reviews