Serpents in the Cold (The Boston Saga #1) (Paperback) 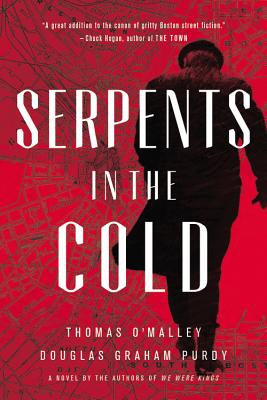 This is book number 1 in the The Boston Saga series.

A serial killer stalks the streets of 1950s Boston -- and two friends take it upon themselves to bring him down.

Post-war Boston is down on its luck and looking for change. A year after the Great Brink's Robbery -- the largest robbery in the history of the United States -- Boston is known more for its seedy underbelly than for its rich, historical past. The winter of 1951 is the worst in recent memory, and the Bruins are suffering another losing season.

Like Boston itself, lifelong residents Cal O'Brien and Dante Cooper are struggling to find their identities after World War II. Cal has built a mildly promising life for himself as an employee of a company providing private security, whether to an honorable businessman who needs a night watchman or to an Irish mafioso who needs to have someone's legs broken. Dante is everything Cal is not. A heroin addict trying and failing to stay clean, Dante feels the call to do good after he discovers that his sister-in-law was the latest victim of a serial killer targeting disadvantaged women.

Woefully unqualified, but determined to help, Cal and Dante take it upon themselves to track the killer -- but their daunting quest takes on dangerous consequences when the trail leads them to the highest ranks of city government. There are a few well-placed men who don't want Cal and Dante to solve this case.

An absorbing mixture of history and suspense, told with a meticulous eye for detail and character, Serpents in the Cold is a moving exploration about two men battling for second chances.

Thomas O'Malley is a graduate of the University of Massachusetts, Boston, and the Iowa Writers' Workshop, and currently teaches on the faculty of creative writing at Dartmouth College. He lives in the Boston area.

Douglas Graham Purdy is a graduate of the University of Massachusetts, Boston and currently works in Film & Media Studies at MIT. Serpents in the Cold is his first novel.

"There is a classic noir sensibility at work in Serpents in the Cold, complete with its uncannily rendered sense of time and place, but the novel is also suffused with a thoroughly modern understanding of loss, pain, damage and the price of loyalty. It's not often you get to pair gritty with lyrical, but you certainly do here."—Alan Glynn, author of Limitless

"[O'Malley and Purdy] excel at the language of their characters. . . . Nothing is innocent, and nobody is what he or she seems."—Clea Simon, Boston Globe

"In the best noir tradition, these co-authors shine a smoky light on lives often lived in the shadows; in this case, the inhabitants who lived in Scollay Square and the West End of Boston, before it all disappeared under the developers' wrecking ball."—WBUR

"This is a bone-crunching, gut-wrenching novel that captures the atmosphere of a city in decay and its inhabitants. It delivers noir fiction like we always want it to be."—Kirkus Reviews

"Serpents in the Cold is a great addition to the canon of gritty Boston street fiction, a no-punches-pulled look at a bygone era. Noir is how we like our crime, and "no-'R'" is how we pronounce it."—Chuck Hogan, author of The Town