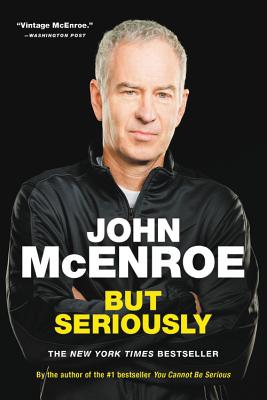 He is one of the most controversial and beloved athletes in history, a tennis legend and a volcanic, mesmerizing presence. But after reaching the top of his game - what came next? Fifteen years after his international number-one bestseller You Cannot Be Serious, John McEnroe is back and ready to talk.

Now the undisputed elder statesman of tennis, McEnroe has won over his critics as a brilliant commentator at the US Open, Wimbledon, and other Grand Slam tournaments - with outspoken views on the modern game, its top players, and the world of 21st century sport and celebrity. Who are the game's winners and losers? What's it like playing guitar onstage with the Rolling Stones, hitting balls with today's greats, confronting his former on-court nemeses, getting scammed by an international art dealer, and raising a big family while balancing McEnroe-sized expectations?

In But Seriously, John McEnroe confronts his demons and reveals his struggle to reinvent himself from champion and tennis legend to father, broadcaster, and author. The result is a richly personal account, blending anecdote and reflection with razor sharp and brutally honest opinions, all in McEnroe's signature style. This is the sports book of the year: wildly entertaining, very funny, surprisingly touching, and 100% McEnroe.

In addition, John is a father of six, an art collector, musician and businessman. He and his wife Patty Smyth live in Manhattan. He is the author of the bestselling memoir You Cannot Be Serious.

Praise for But Seriously

"A brutally honest memoir in which [McEnroe] writes with characteristic brazenness about the sport, broadcasting and fatherhood."—CBS News

"Tennis fans... will not be disappointed.... With his signature irreverence, tempered just a bit by age, McEnroe serves up a juicy, revealing look at how his tennis afterlife is playing out off the court."—Kirkus

"McEnroe has successfully commoditized the anger and artistry that made him one of the most charismatic champions in tennis history."—Joel Drucker, San Francisco Chronicle

"Vintage McEnroe... [he] appears nostalgic and even reflective on some of his past behavior and comments, especially when it comes to issues with his family.... the most tender and vulnerable moments in the book arrive when McEnroe writes about not being appreciative enough of his late father, his son Kevin's arrest for alleged cocaine possession (which turned out to be baking soda) and his own battles with drug use."—Kelyn Soong, The Washington Post

"[McEnroe] is brutally honest about his mellowing life and his ever-evolving career in this second entertaining literary foray."—The Winnipeg Free Press

Praise for You Cannot Be Serious