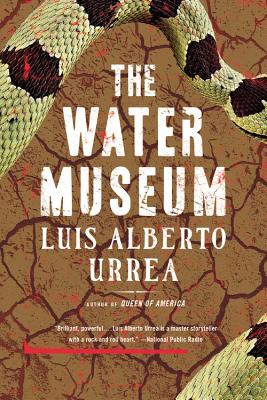 By Luis Alberto Urrea
$17.91
Not Available

From one of America's preeminent literary voices comes a story collection that proves once again why the writing of Luis Alberto Urrea has been called "wickedly good" (Kansas City Star), "cinematic and charged" (Cleveland Plain Dealer), and "studded with delights" (Chicago Tribune).

Examining the borders between one nation and another, between one person and another, Urrea reveals his mastery of the short form. This collection includes the Edgar-award winning "Amapola" and his now-classic "Bid Farewell to Her Many Horses," which had the honor of being chosen for NPR's "Selected Shorts" not once but twice.

Suffused with wanderlust, compassion, and no small amount of rock and roll, The Water Museum is a collection that confirms Luis Alberto Urrea as an American master.

A finalist for the Pulitzer Prize for his landmark work of nonficiton The Devil's Highway, Luis Alberto Urrea is also the bestselling author of the novels The Hummingbird's Daughter, Into the Beautiful North, and Queen of America, as well as the story collection The Water Museum, a PEN/Faulkner Award finalist.

He has won the Lannan Literary Award, an Edgar Award, and a 2017 American Academy of Arts and Letters Award in Literature, among many other honors. Born in Tijuana to a Mexican father and American mother, he lives outside of Chicago and teaches at the University of Illinois-Chicago.

"All 13 stories are realistic and unsparing, as unflinching and hard-hitting as they are beautiful. It's difficult to find comparisons to an author as original as Urrea, a kind of literary badass who still believes in love. The Water Museum is a brilliant, powerful collection, and Luis Alberto Urrea is a master storyteller with a rock and roll heart."—NPR.org

"Urrea, celebrated for his historical sagas and nonfiction, offers 13 stories that reflect both sides of his Mexican-American heritage while stretching the reader's understanding of human boundaries...Urrea's command of language is matched only by his empathy for his characters."—Kirkus (Starred Review)

"Urrea has a wonderful eye for details and captures each story's context with wonderfully sharp observations... These stories are vibrant, tender, and invoke a strong sense of place."—Publishers Weekly