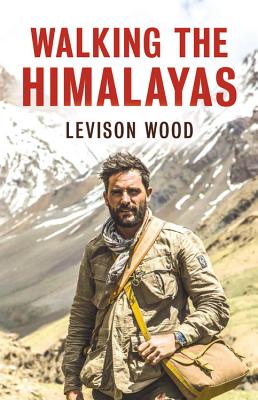 Following his trek along the length of the Nile River, explorer Levison Wood takes on his greatest challenge yet: navigating the treacherous foothills of the Himalayas, the world's highest mountain range.

Praised by Bear Grylls, Levison Wood has been called "the toughest man on TV" (The Times UK). Now, following in the footsteps of the great explorers, Levison recounts the beauty and danger he found along the Silk Road route of Afghanistan, the Line of Control between Pakistan and India, the disputed territories of Kashmir and the earth-quake ravaged lands of Nepal.

Over the course of six months, Wood and his trusted guides trek 1,700 gruelling miles across the roof of the world. Packed with action and emotion, Walking the Himalayas is the story of one intrepid man's travels in a world poised on the edge of tremendous change.

Levison Wood is a full time explorer and writer. Having spent ten years in the British Army, he has led expeditions on five continents and has travelled in over 80 countries. As a photographer and journalist he specialises in documenting people and cultures in remote regions and post-conflict zones. He has worked with various regional and national government departments in promoting access in developing economies. He is a Fellow of the Royal Geographical Society and International Fellow of the Explorers Club.

Praise for Walking the Himalayas

"Britain's best-loved adventurer....he looks like a man who will stare danger in the face and soak up a lot of pain without complaint."
—Times (UK)

"Exhilarating....During his trek, he encounters horse-mounted Kyrgyz nomads, breaks his arm in a car wreck, climbs a few mountains and meets the Dalai Lama. Oh, just typical stuff. [Wood's] an amiable companion. A former British army officer, a veteran of engagements in Afghanistan, he's just the kind of guy you want with you on an adventure."
—Timothy R. Smith, The Washington Post

"Wood's skills as a travel writer have not diminished and his descriptions of the terrain and cultures he encounters are vivid. As in the previous book, his character sketches of his local guides are sharply drawn and memorable."—J. Kemper Campbell MD, Lincoln Journal Star

"In the macho, adrenaline-fueled arena of TV adventurers, Levison Wood is that rare beast: the real deal."—Radio Times (UK)

"Wood skillfully intersperses cultural, political, religious and historical information about the region he trekked through with beautiful, detailed descriptions of the people and countryside. Despite private audiences with the Dalai Lama, a swami, and a cannibal, all of whom gave him important advice, the most significant revelations come as Wood stands at the end of his quest."—Lee E. Cart, Shelf Awareness

"He is the real deal: a former paratrooper, a major in the army reserves and as hard as nails."—Telegraph (UK)

"Another harrowing yet illuminating story of perseverance."
—Jon Foro, The Amazon Book Review

"The desire to explore unfamiliar places is pure and admirable, and Wood is a likable guide."
—Kirkus Reviews

Praise for Walking the Nile

"Mr. Wood's interest, as well as his talents as a writer, lie not so much in describing the vast, shifting landscapes of east and north Africa but in finding out "what life was like in corners of the world that do not always make it into our headlines" and in capturing the character and foibles of the people who inhabit them.

Wood has a good eye for detail and a better ear for dialogue, whether it is to capture the menace of orders from secret police, the size of a young Mundari tribesman in Sudan, or the encouragement of the friends who join him at various stages of the long march."
—Anthony Sattin, Wall Street Journal

"A series as real and raw as the landscape."
—The Times (London)

"What started as a travelogue is fast turning into a fascinating and tense documentary."—Daily Star (Five Star Review)

"Lev's been amiable and self-effacing throughout this 4,000-mile challenge... Channel 4, you may have found a new wandering star."—Radio Times