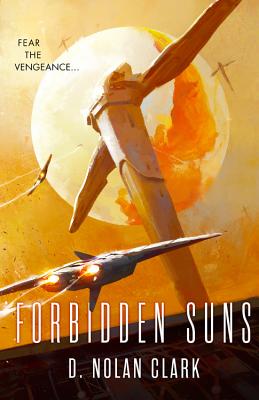 This is book number 3 in the The Silence series.

The third and final book in the epic space adventure trilogy by D. Nolan Clark.

In the cold of space, the fire of revenge still burns.

Aleister Lanoe has been on a mission since before he can remember. Honing his skills as a fighter pilot and commander through three centuries of constant warfare, he has never met a foe he cannot best.

But now he faces a mission which may be his last: take vengeance on the alien race who has coldly and systematically erased all the sentient life in its path.

In all his years at war, the stakes have never been higher. . .

D. Nolan Clark is a pseudonym for an acclaimed author who has previously published several novels in different genres.

No less intriguing and action-packed than its predecessor. Here, sci-fi tropes such as AI and space aliens are turned into something entirely thoughtful and original.—RT Book Reviews on Forgotten Worlds

"Unforgettable characters and is jam-packed with action [and] adventure... one readers will not want to miss."—Booklist on Forsaken Skies

"About as exciting an action story set in space as any this reviewer has seen in print in quite some time. It is worth the read... a terrific and thrilling novel."—SciFi Magazine on Forsaken Skies