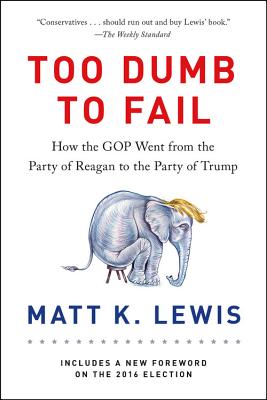 From a leading voice among young conservatives, an impassioned argument that to stay relevant the Republican Party must look beyond short-term electoral gains and re-commit to historic conservative values.

In 1963 Richard Hofstadter published his landmark book Anti-Intellectualism in American Life. Today, Matt Lewis argues, America's inclination toward simplicity and stupidity is stronger than ever, and its greatest victim is the Republican Party. Lewis, a respected conservative columnist and frequent guest on MSNBC's Morning Joe, eviscerates the phenomenon of candidates with a "no experience required" mentality and tea party "patriots" who possess bluster but few core beliefs.

Lewis traces the conservative movement's roots, from Edmund Burke to William F. Buckley, and from Goldwater's loss to Reagan's landslide victory. He highlights visionary thinkers who understood nuance and deep ideology and changed the course of the nation. As we approach the 2016 presidential election, Lewis has an urgent message for fellow conservatives: embrace wisdom, humility, qualifications, and inclusion -- or face extinction.

"Lewis is a product of the conservative counterestablishment as reinvented by the Internet revolution... Lewis' knockabout style is a relief.... [He] argues that conservatives must recover the enthusiasm for ideas they had in the Reagan era."—New York Times Book Review (cover review)

"I've been reading Matt for a long time. He's always incisive and thoughtful and this book is both. Anyone who cares about the future of the Republican party should read it."—Peggy Noonan, Wall Street Journal columnist

"Matt K. Lewis takes the most unconventional possible approach to Washington journalism: he's completely honest all the time. Not everyone likes him for it, but that's their problem. Like Matt himself, this book is cheerful, smart and insightful as hell. Buy two copies."—Tucker Carlson, editor-in-chief of The Daily Caller, co-host of FOX & Friends Weekend

"Matt K. Lewis has fought in the trenches of some of our hottest political battles, occupying a unique position at the intersection of conservative politics and the popular culture. He brings a rare perspective to everything he writes about, and manages to look at what everyone else is looking at and see what no one sees."—Yuval Levin, editor of National Affairs

"Matt K. Lewis has written an insightful book about the roots of the conservative movement-and just how far Washington Republicans have diverged from that proud past. Too Dumb to Fail is a major achievement from one of conservatism's most important voices, and it could not come at a more critical time."—Joe Scarborough, host of MSNBC's Morning Joe

"Matt K. Lewis is one of the sharpest and most principled political commentators of our day. Too Dumb to Fail is a lively and fascinating read for any person confounded by the state of today's Republican Party. Lewis provides some much-needed tough love as well as a clear way forward for the GOP. If Republicans are smart, they'll make this book mandatory reading."—Kirsten Powers, New York Times-bestselling author of The Silencing

"Very few books about politics get my 'must read' stamp, but Matt Lewis' is one of them. Every conservative feeling as though the movement has collapsed, every Republican despairing of ever winning the White House, every independent who has no idea what to do or whom to support, should read this book immediately."—Hugh Hewitt, host of The Hugh Hewitt Show

"Too Dumb to Fail traces the evolution of conservative philosophy from Aristotle to Burke to the present in a clear and readable way that reminds us why conservatives need big ideas--and why America needs conservatism."—Arthur C. Brooks, President, American Enterprise Institute

"Too Dumb to Fail... functions as a smart, sobering pre-mortem on 2016. Now, most books about 'fixing' conservatism are written by liberal concern-trolls who secretly want to kill it. But Lewis is an actual, real-deal conservative.... This, ultimately, is what Lewis really wants: A conservative movement that honors its intellectuals, that works through its ideological problems honestly, and that doesn't rush to glorify hucksters.... If you put Donald Trump or Sarah Palin back in 1980, they couldn't last a week in the ring with the Gipper. Because back then, conservatives expected more from their leaders. Matt Lewis thinks we should expect more today, too. He's probably right."—Jonathan V. Last, The Weekly Standard

"[Lewis] does not shy away from naming names.... This book is far from a standard D.C. 'if only they listened to me' critique.... Conservatives who feel dismayed at the current state of affairs should run out and buy Lewis' book."—Henry Olsen, The Weekly Standard

"Too Dumb to Fail provides the Republican Party a roadmap to get back to its intellectual foundations. With the rise of Donald Trump and Sarah Palin, the book perfectly represents the state of the Republican Party and where it's headed if it doesn't return to its core beliefs... Prescient."—Christian Schneider, Milwaukee Journal-Sentinel

"Lewis ... has probed the true makeup of today's GOP."—Washington Post

"Lewis' book offers a wise and far-reaching and brave take on how we got here and what conservatives must do to enlist the 'accumulated wisdom of the past to make our future even brighter.'... Too Dumb to Fail is worth reading and pondering, because we are watching many of the themes Lewis pinpoints play out in real time ... Too Dumb to Fail is a great summing up. It's also practical and specific. Earnest, witty and well-meaning, Lewis is more of a truth-teller than a diplomat or glad-hander. He names names.... This will not make [Lewis] popular. After the November 2016 elections, however, it may make Matt Lewis something of a prophet."—Washington Times

"Right from the
beginning, Lewis shows the courage to take on conventional wisdoms in modern
conservatism, and that alone makes his book essential."—Craig Shirley,Newsmax

"A great read... Really worth reading and thinking about."—Newt Gingrich (via Facebook)