Undisclosed Files of the Police: Cases from the Archives of the NYPD from 1831 to the Present (Hardcover) 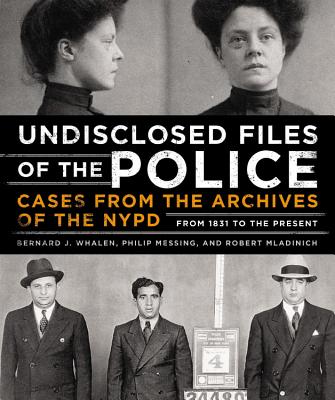 More than 175 years of true crimes culled from the city's police blotter, told through startling, rarely seen images and insightful text by two NYPD officers and a NYC crime reporter.
From atrocities that occurred before the establishment of New York's police force in 1845 through the terrorist attack on the World Trade Center in 2001 to the present day, this visual history is an insider's look at more than 80 real-life crimes that shocked the nation, from arson to gangland murders, robberies, serial killers, bombings, and kidnappings, including:

Perfect for crime buffs, urban historians, and fans of Serial and Making of a Murderer, this riveting collection details New York's most startling and unsettling crimes through behind-the-scenes analysis of investigations and more than 500 revealing photographs.

Philip Messing is a long-time police reporter for the New York Post.

Robert Mladinich is a retired detective for the NYPD, where he was named Cop of the Year in 1985. He written a number of true crime books, including From the Mouth of the Monster: The Joel Rifkin Story, as well as articles for magazines including Playboy and Details. He is also the writer/editor for Frontline, a publication of the NYC Sergeants Benevolent Association.

"Fact rivals fiction in this gritty, well-researched collection, an insiders' look at more than 175 years of New York's most infamous crimes. The authors - NYPD Lieutenant Bernand Whalen, crime reporter Philip Messing and retired Detective, Robert Mladinich -- have detailed a history of many of the city's most notorious and zaniest capers."—Nicholas Pileggi, author of the bestsellers Casino and Wiseguy

New York characters galore, both good guys and gangsters, leap from the pages of Undisclosed Files of the Police.—Sam Roberts, The New York Times

Undisclosed Files of the Police has something for every crime aficionado, from Mafia buffs to those who are captivated by headline grabbing trials.—Anthony M. DeStefano, Newsday

True-crime buffs should be sated by this morbid peek into the past.—The Village Voice

Complete with incredible photographs, the book is a perfect gift for anyone with a love of true crime or New York history.—Noah Cruickshank, Shelf Awareness