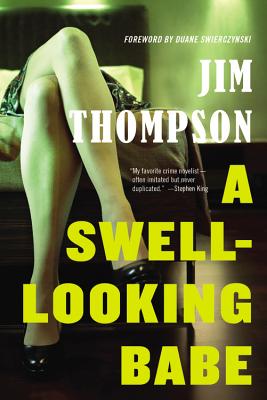 It was supposed to be only a temporary job -- something to pay the bills until Dusty could get his feet back on the ground and raise enough money for medical school. After all, there's nothing wrong with being a bellboy at a respectable hotel like the Manton -- that is, until she came along.

Marcia Hillis. The perfect woman. Beautiful. Experienced. Older and wiser. The only woman to ever measure up to that other her -- the one whose painful rejection Dusty can't quite put from his mind.

But while Dusty has designs on Marcia, Marcia has an agenda of her own. One that threatens to pull the Manton inside-out, use Dusty up for all he's worth and leave him reeling and on the run, the whole world at his heels.

A richly-imagined crime narrative of the Oedipal and betrayal, A Swell-Looking Babe is Thompson at his very best -- a cornerstone in Thompson's enduring legacy as the Dimestore Dostoyevsky of American fiction.

Jim Thompson was born in Anadarko, Oklahoma. He began writing fiction at a very young age, selling his first story to True Detective when he was only fourteen. Thompson eventually wrote twenty-nine novels, all but three of which were published as paperback originals.

Thompson also co-wrote two screenplays (for the Stanley Kubrick films The Killing and Paths of Glory). Several of his novels have been filmed by American and French directors, resulting in classic noir including The Killer Inside Me (1952), After Dark My Sweet (1955), and The Grifters (1963).