The League of Unexceptional Children: Get Smart-ish (Paperback) 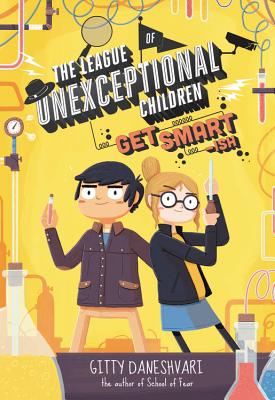 By Gitty Daneshvari
$7.83
Not Available

This is book number 2 in the The League of Unexceptional Children series.

A hilarious and action-packed sequel to The League of Unexceptional Children!

Jonathan Murray: Twelve years old. Wears khaki pants to tell the world he plans on driving the speed limit when he grows up. Saved the world once; it was probably a fluke.

Shelley Brown: Twelve years old. Narrates her imaginary exploits as if she is the subject of a documentary film. Saved the world once; it was probably a fluke.

The Prime Minister of the United Kingdom has called upon Jonathan and Shelley to catch a criminal who has stolen a virus that makes people less smart. When the stakes are this high, can the kids be the utterly average spies the world needs them to be and save the day? Embrace your unexceptional side in this hysterically funny sequel!

Gitty Daneshvari was an average child, the kind who never made much of a mark academically, athletically, or socially, so it hardly came as a surprise when she was rejected from her school's Talented and Gifted Program. On the contrary, Gitty had long ago accepted that she simply wasn't "special," unless of course you counted her long list of phobias (please read School of Fear for further explanation). Luckily, as Gitty aged, she realized that while she lacked natural talent, there was nothing stopping her from figuring out what she enjoyed and then working hard to become better at it.

Gitty is the author of the series The League of Unexceptional Children, School of Fear, and Monster High: Ghoulfriends. She invites you to visit her online at GittyDaneshvari.com and @GittyDaneshvari.

Praise for The League of Unexceptional Children:
"Delivers hilarious shenanigans...This humorous new series is sure to appeal to fans of Daneshvari and other lovers of the ludicrous."—Kirkus Reviews

"Pokes sly fun at the pressure to raise future valedictorians and CEOs, by turning the tables on the classic trope of an average kid discovering greatness...Daneshvari's fast-paced, twisty story is chock-full of clever humor."—Publishers Weekly

"This...amusing chapter book goes down easy. Even with the fate of the world resting on their 'slightly hunched' shoulders, the main characters are so disarmingly upfront about their inadequacies that they'll definitely have readers on their side."—Booklist

"It will hook readers and have them anxiously awaiting the next adventure."—School Library Connection