The League of Unexceptional Children: The Kids Who Knew Too Little (Hardcover) 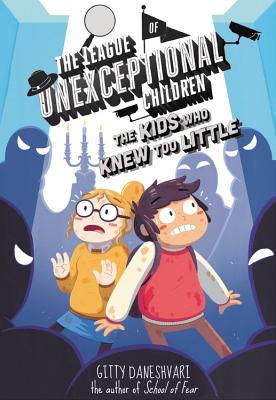 This is book number 3 in the The League of Unexceptional Children series.

The final book in a smart, funny, and exceptional middle grade series about unexceptionals from School of Fear author Gitty Daneshvari!

Since being recruited by the League of Unexceptional Children, Jonathan Murray and Shelley Brown have rescued the vice president and stopped the outbreak of a virus capable of dimming human intelligence. Against all odds, these totally average spies have somehow managed to save the day...twice.

Now Jonathan's parents have been arrested by the CIA for treason, and liberating them means going head-to-head with a secret organization so powerful it has literally changed the course of history. It's Jonathan and Shelley's most dangerous mission yet, and one that will decide their fate as members of the League. Will they be able to accidentally sort of save the day one last time?

Gitty Daneshvari was an average child, the kind who never made much of a mark academically, athletically, or socially, so it hardly came as a surprise when she was rejected from her school's Talented and Gifted Program. On the contrary, Gitty had long ago accepted that she simply wasn't "special," unless of course you counted her long list of phobias (please read School of Fear for further explanation). Luckily, as Gitty aged, she realized that while she lacked natural talent, there was nothing stopping her from figuring out what she enjoyed and then working hard to become better at it.

Gitty is the author of the series The League of Unexceptional Children, School of Fear, and Monster High: Ghoulfriends. She invites you to visit her online at GittyDaneshvari.com and @GittyDaneshvari.

Praise for The League of Unexceptional Children:
"Delivers hilarious shenanigans...This humorous new series is sure to appeal to fans of Daneshvari and other lovers of the ludicrous."—Kirkus Reviews

"Pokes sly fun at the pressure to raise future valedictorians and CEOs, by turning the tables on the classic trope of an average kid discovering greatness...Daneshvari's fast-paced, twisty story is chock-full of clever humor."—Publishers Weekly

"This...amusing chapter book goes down easy. Even with the fate of the world resting on their 'slightly hunched' shoulders, the main characters are so disarmingly upfront about their inadequacies that they'll definitely have readers on their side."—Booklist

"It will hook readers and have them anxiously awaiting the next adventure."—School Library Connection