There Before the Chaos (The Farian War #1) (Paperback) 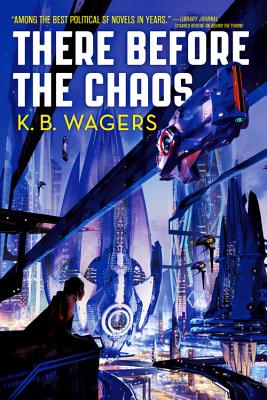 This is book number 1 in the The Farian War series.

The propulsive start of a dynamic space opera trilogy featuring a gunrunning empress who must navigate alien politics and deadly plots to prevent an interspecies war.

When the Empire's closest ally asks her to intervene in a galactic military crisis, she embarks on the highest stakes diplomatic mission Indrana has ever faced.

Caught between two powerful alien civilizations at each other's throats, Hail has one chance to make peace, before all of humanity becomes collateral damage in a full-blown galactic war.

Praise for There Before the Chaos:

K.B. Wagers is the author of the Indranan & Farian War trilogies with Orbit Books and the NeoG novels from Harper Voyager. They hold a bachelor's degree in Russian Studies and a second-degree blackbelt in Shaolin Kung Fu. A native of Colorado, K.B. lives at the base of the Rocky Mountains with their partner and a crew of recalcitrant cats. In between books, they can be found attempting to learn Spanish, dying in video games, dancing to music, and scribbling new ideas in their bullet journal.

"Twisty and clever and magnificent, full of political maneuvers, space action, and genuine feeling. The end broke my heart in the best sort of way. I cannot wait for the next book."—Beth Cato

"Wagers achieves a rare balance of action... tension, and quiet moments, keeping pages turning while deepening the portraits of Hail and the friends and foes around her. Fans of the original trilogy will welcome Hail's return, and any space opera reader can easily jump in here."—Publishers Weekly

"Perfectly executed.... Science fiction with brains, and a buckload of heart.... K. B. Wager's latest novel manages the trickiest of tasks, deftly moving from galactic spanning space opera to insightful character piece and back again without missing a single beat."—The Eloquent Page

"Nerve-wracking action on the ground and in space, dark humor, and the characters' til-the-end loyalty to one another... A satisfyingly thunderous end to Hail's quest for vengeance that makes an excellent addition to any SF collection."—Publishers Weekly (starred review) on Beyond the Empire

"Satisfying... Wagers's high-octane space opera trilogy is particularly appealing for its relationships."—Library Journal (starred review) on Beyond the Empire

"A rich tapestry of nuanced characters and a story that makes you care about them... I can't wait to see what she'll do next."—Pop Culture Beast on Beyond the Empire

"Kick ass space opera with a heart. I loved it."—The Eloquent Page on Beyond the Empire

"'Crown' is fast paced, and its focus on a female action heroine defined by her decisions rather than romance is refreshing and fun."—The Washington Post on After the Crown

"Two books in, this series has exemplified political plotting as compelling as the badass heroine at its center."—B&N Sci-Fi & Fantasy Blog on After the Crown

"Craving a galactic adventure? K.B. Wagers' second Indranan War novel is just the ticket."—Bookish on After the Crown

"This is pitch perfect science fiction that blends action, adventure, political intrigue and more than a little heart."—The Eloquent Page on After the Crown

"Hail is quickly becoming a favorite character... for fans of shows like Firefly and Killjoys there's a lot to love."—Pop Culture Beast on After the Crown

"Full of fast-paced action and brutal palace intrigue, starring the fiercest princess this side of Westeros."—B&N Sci-Fi & Fantasy Blog on Behind the Throne

"Taut suspense, strong characterization, and dark, rapid-fire humor are the highlights of this excellent SF adventure debut."—Publishers Weekly (starred review) on Behind the Throne

"Promising science-fiction series... for fans of stories with plenty of action and political maneuvering."—Booklist on Behind the Throne

"This debut ranks among the best political SF novels in years, largely because of the indomitable, prickly Hail... fast-paced, twisty space opera."—Library Journal (starred review) on Behind the Throne