Down Among the Dead (The Farian War #2) (Paperback) 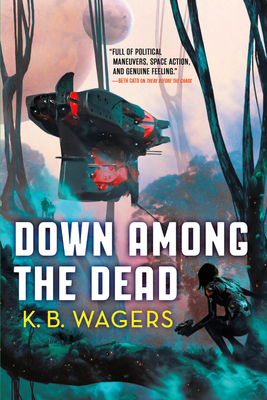 This is book number 2 in the The Farian War series.

Gunrunner empress Hail Bristol must navigate alien politics and deadly plots to prevent an interspecies war, in this second novel of the Farian War space opera trilogy. In a surprise attack that killed many of her dearest subjects, Hail Bristol, empress of Indrana, has been captured by the Shen -- the most ruthless and fearsome aliens humanity has ever encountered. As she plots her escape, the centuries-long war between her captors and the Farians, their mortal enemies and Indrana's oldest allies, finally comes to a head. When her captors reveal a shocking vision of the future, Hail must make the unexpectedly difficult decision she's been avoiding: whether to back the Shen or the Farians. Staying neutral is no longer an option. Will Hail fight? Or will she fall? Praise for The Farian War Trilogy:

"Action- and emotion-packed, folding political tension, personal relationships, and trauma into a vivid space opera that does not pull any punches." —Library Journal (starred review)

K. B. Wagers is the author of the Indranan & Farian War trilogies with Orbit Books and the new NeoG novels from Harper Voyager. They hold a bachelor's degree in Russian Studies and a second-degree blackbelt in Shaolin Kung Fu. A native of Colorado, K.B. lives at the base of the Rocky Mountains with their partner and a crew of recalcitrant cats. In between books, they can be found attempting to learn Spanish, dying in video games, dancing to music, and scribbling new ideas in their bullet journal.

"Action- and emotion-packed, folding political tension, personal relationships, and trauma into a vivid space opera that does not pull any punches."—Library Journal (starred review)

"Twisty and clever and magnificent, full of political maneuvers, space action, and genuine feeling. The end broke my heart in the best sort of way. I cannot wait for the next book."—Beth Cato on There Before the Chaos

"Wagers achieves a rare balance of action... tension, and quiet moments, keeping pages turning while deepening the portraits of Hail and the friends and foes around her. Fans of the original trilogy will welcome Hail's return, and any space opera reader can easily jump in here."—Publishers Weekly on There Before the Chaos

"This series launch provides an exciting dose of space opera and political intrigue peppered with hard choices. Highly recommended for fans of science fiction with assertive female characters."—Booklist on There Before the Chaos

"Perfectly executed.... Science fiction with brains, and a buckload of heart.... K. B. Wager's latest novel manages the trickiest of tasks, deftly moving from galactic spanning space opera to insightful character piece and back again without missing a single beat."—The Eloquent Page on There Before the Chaos