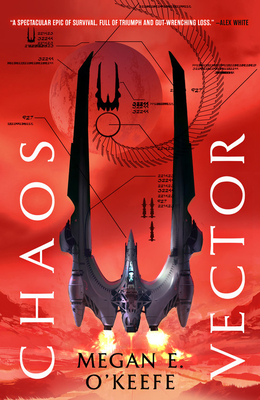 This is book number 2 in the The Protectorate series.

Dazzling space battles, intergalactic politics, and rogue AI collide in the second book in this epic space opera by award-winning author Megan O'Keefe.
Sanda and Tomas are fleeing for their lives after letting the most dangerous smartship in the universe run free. Now, unsure of who to trust, Sanda knows only one thing for certain -- to be able to save herself from becoming a pawn of greater powers, she needs to discover the secret of the coordinates hidden in her skull.
But getting to those coordinates is a problem she can't solve alone. They exist beyond a dead gate -- a Casimir gate that opened up into a dead-end system without resources worth colonizing, and was sealed off. To get through the dead gate, she needs the help of the enemy Nazca. But some Nazca are only interested in the chip in her head -- and they'll crack her open to get to it.

Megan E. O'Keefe was raised amongst journalists, and as soon as she was able joined them by crafting a newsletter which chronicled the daily adventures of the local cat population. She has worked in both arts management and graphic design, and has won Writers of the Future and the Gemmell Morningstar Award.
Megan lives in the Bay Area of California.

"Velocity Weapon is a spectacular epic of survival, full of triumph and gut-wrenching loss."—Alex White, author of The Salvagers Series

"Velocity Weapon is a roller-coaster ride of pure delight. Furious action sequences, funny dialog, and touching family interactions all wrapped up in a plot that will keep you guessing every step of the way. This is one of the best science fiction novels of 2019."—K. B. Wagers, author of the Indranan War Trilogy

"O'Keefe delivers a complicated, thoughtful tale that skillfully interweaves intrigue, action, and strong characterization. Themes of found family, emotional connection, and identity run throughout, backed up by strong worldbuilding and a tense narrative. This series opener leaves multiple plot threads open for further development, and readers will look forward to the next installments."—Publishers Weekly on Velocity Weapon