Young Guns: Obsession, Overwatch, and the Future of Gaming (Paperback) 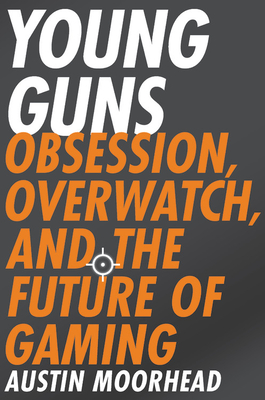 THE FASCINATING INSIDE STORY OF THE QUEST TO BUILD THE WORLD'S MOST AMBITIOUS PROFESSIONAL GAMING LEAGUE--AND THE RACE TO WIN ITS $1,000,000 PRIZE.

Welcome to the high-stakes world of esports where shit-talking teenage gamers, billionaire sports franchise owners, and celebrity entrepreneurs are all competing to understand and conquer the fast-emerging future of entertainment. The burgeoning frontier of professional gaming has moved beyond the niche corners of the internet to become a global phenomenon, upending youth viewership for the major sports leagues and opening a generational rift over the nature of "athletics." Soon, professional video game competitions may well be as ingrained in our culture as Monday Night Football.

YOUNG GUNS: Obsession, Overwatch, and the Future of Gamingtakes readers behind the scenes of the esports boom and into the lives of the gamers and game changers leading the charge, unfurling a wry, unexpected, and often hilarious narrative about the rise of professional gaming and the business of electronic sports.

An avid gamer himself, author Austin Moorhead became fascinated by pro gaming, in particular the Overwatch League (OWL) after sports titans Robert Kraft, Stan Kroenke, and Jeff Wilpon each paid $20 million for a team. At the same time that he began investigating the inner-workings of the league, OWL launched esports into the American mainstream, inking TV deals with ABC and ESPN, selling out NBA stadiums for live competitions, and minting a new version of young pro athletes.

Embedding with two top teams in the Overwatch League, the San Francisco Shock and the London Spitfire, as they embark on the inaugural season, Moorhead pulls back the curtain on the grueling practice schedules and spartan lifestyles of the league's most popular players. In addition to the "gamer houses" and competitions in which the pros hone their skills, Moorhead takes readers into the board room of Overwatch-developer Blizzard Entertainment, where entrepreneurs eager to capitalize on youth culture take bets on new esports franchises for tens of millions. The result is a rollicking story about the superstars of the future and the absurd collision of adolescent prodigies and high-stakes industry, an uproarious look at the future of sports and entertainment that is part Bringing Down the House, part Moneyball.

An avid gamer, Austin Moorhead has worked as a consultant and investor. Young Guns is his first book. He lives in Los Angeles.

"Young Guns tells the story of the world's first professional gaming league...[reveals] the inside story of the first championship."—Publishers Weekly

"Moorhead gives readers
unprecedented access to the team dynamics and drama of esports while tracking
the ambitious rise of the first global league. His year-long journey yields
insight on the hard work and luck required to be an esports champion."—Christopher"MonteCristo" Mykles, Esports Personality and Former OWL Caster

"Austin Moorhead
gets inside the heads of the gamers... These eccentric characters may be
playing a form of basketball, but they will never be confused for the real
LeBron James. That's okay, because in a very different way they are just as
captivating."—Filip Bondy, NewYork Times bestselling author of The Pine Tar Game

"George Plimpton + Hunter Thompson = Austin Moorhead. In Young Guns, Moorhead has written a compelling, hilarious and heartbreaking account of gamers and their games. Either that, or a survival manual for the coming apocalypse. Who knew that these young armchair athletes were engaged in the most brutal sport of all. The first great cultural chronicle of this new decade."—Sam Kashner, New York Times bestselling authorand editor-at-large at Air Mail

"A fascinating, entertaining look at a growing phenomenon, Young Guns takes us behind the scenes of the gamers and opportunists redefining the meaning of sports. Austin Moorhead masterfully weaves a high-stakes business narrative with a hilarious romp."—Marshall Ulrich, extreme endurance athlete and authorof Running on Empty and Both Feet on the Ground

"A fast-paced, dramatic read....essential reading for anyone with an
interest in the modern climate's esports explosion."—TheGamer

"...[T]his fast-paced, highly recommended book will appeal to readers interested in learning more about eSports and their growing popularity."—Library Journal