All the Demons Are Here: A Novel (Hardcover) 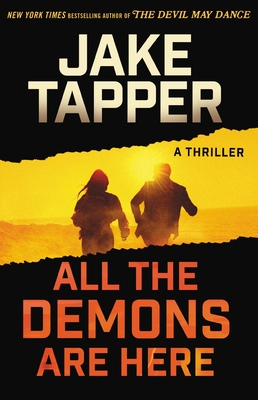 From the bestselling author of The Devil May Dance and The Hellfire Club—a new thriller set in 1977 following the Marder children: Ike, an AWOL U.S. Marine who joins Evel Knievel's pit crew after a horrifying experience in combat, and Lucy, an aspiring journalist who gets caught up with a powerful British family starting a brand new tabloid in the US.

It's 1977. Ike and Lucy, Senator Charlie and Margaret Marder's kids, are grown up—and in trouble. US Marine Ike has gone somewhat off the grid, working on Evel Knievel's pit crew in Montana, when—after a bar fight—he has to flee a neo-Nazi gang and seek refuge in the woods with a group of Vietnam veterans. Lucy, a reporter, has become the star of the brand new Washington DC tabloid, the Sentinel, and is breaking all sorts of stories about a serial killer and falling in with the Lyons, the wealthy family that owns the newspaper, British immigrants with quite a different view of journalism than Lucy's heroes Woodward and Bernstein. As their lives spiral out of control, Ike goes on the road with Evel Knievel, the Vietnam veterans, and other societal outcasts, first heading to Graceland to mourn Elvis Presley, then going to confront politicians—for grievances real and perceived—on an island in Georgia. Lucy, too, is at that retreat with both her parents and the Lyon family, attendees at this retreat where the future of the post-Nixon Republican party will be decided. The confrontation turns violent and both Ike and Lucy have to make decisions that will affect them for the rest of their lives.

Jake Tapper is the author of The Hellfire Club, which is being turned into a TV series, and The Outpost, which became a celebrated film released in 2020. An award-winning anchor for CNN, he joined the network in January 2013. He lives in Washington, D.C., with his wife, daughter, and son.