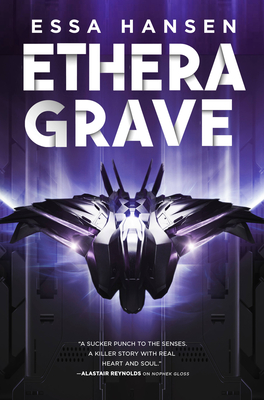 This is book number 3 in the The Graven series.

In the final book of this dark, dangerous, roller coaster of a space opera trilogy, bold new voice Essa Hansen will stretch the limits of your imagination in this mind-bending adventure perfect for fans of The Expanse and A Long Way to a Small Angry Planet.

Caiden has finally been reunited with his sister Leta after ten years on the run with his unique starship and managed to convince his longtime enemy—Threi—to join his side. But the multiverse isn’t safe yet. Threi’s sister is still the most powerful being in existence. And she still wants to collapse their beautiful, diverse, constellation of multiverses down to one.

Now, Caiden and his makeshift family carry the fate of all the worlds in their hands.

Essa Hansen is an author, swordswoman, and falconer. She is a sound designer for science fiction and fantasy films at Skywalker Sound, with credits in movies such as Dr. Strange and Avengers: Endgame.

“An intriguing bubble universe setting, flawed characters, and advanced technology from a compelling sf story that will draw in and hold readers until the very last page ... Hansen’s marvelous debut is a fast-paced, action-filled ride through the multiverse, introducing a complex found family of gender- and neurodiverse characters.”—Library Journal on Nophek Gloss

"Intriguing metaphysical concepts, more fast-paced action, and a climactic revelation regarding Caiden’s mysterious genetic heritage will have fans eager for the next book in the Graven series."—Booklist on Azura Ghost

"Gripping and inventive, Nophek Gloss will delight even as it breaks your heart."—Megan E. O'Keefe, author of Velocity Weapon on Nophek Gloss

"Essa Hansen is one of the most imaginative authors in science fiction today, and in Azura Ghost she delivers a thrill ride of a story."