The Unfathomable Ascent: How Hitler Came to Power (Hardcover) 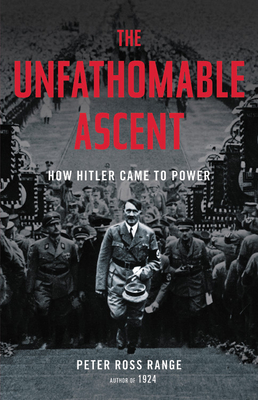 The chilling and little-known story of Adolf Hitler's eight-year march to the pinnacle of German politics.
On the night of January 30, 1933, Adolf Hitler leaned out of a spotlit window of the Reich chancellery in Berlin, bursting with joy. The moment seemed unbelievable, even to Hitler. After an improbable political journey that came close to faltering on many occasions, his march to power had finally succeeded.

While the path of Hitler's rise has been told in books covering larger portions of his life, no previous work has focused solely on his eight-year climb to rule: 1925-1933. Renowned author Peter Ross Range brings this period back to startling life with a narrative history that describes brushes with power, quests for revenge, nonstop electioneering, American-style campaign tactics, and-for Hitler-moments of gloating triumph followed by abject humiliation.

Indeed, this is the tale of a high-school dropout's climb from the infamy of a failed coup to the highest office in Europe's largest country. It is a saga of personal growth and lavish living, a melodrama rife with love affairs and even suicide attempts. But it is also the definitive account of Hitler's unrelenting struggle for control over his raucous movement, as he fought off challenges, built and bullied coalitions, quelled internecine feuds and neutralized his enemies-all culminating in the creation of the Third Reich and the western world's descent into darkness. One of the most dramatic and important stories in world history, Hitler's ascent spans Germany's wobbly recovery from World War I through years of growing prosperity and, finally, into crippling depression.

Peter Ross Range is a world-traveled journalist who has covered war, politics, and international affairs. A specialist in Germany, he has written extensively for Time, the New York Times, National Geographic, the London Sunday Times Magazine, Playboy, and U.S. News & World Report, where he was a White House correspondent. He has also been an Institute of Politics Fellow at Harvard's Kennedy School of Government, a Guest Scholar at the Woodrow Wilson International Center in Washington, and a Distinguished International Visiting Fellow at the University of North Carolina Journalism School. He lives in Washington, DC.

"This book could not be more necessary, as Germany prepares to re-publish Mein Kampf for the first time in 70 years. Range gives us a fluent narrative of Hitler's 13 months in prison, where he wrote his political testament. Eminently readable."—Ronald Rosbottom, author of When Paris Went Dark

"A fast-paced tour-de-force that shows how the German republic wrecked itself from within, Peter Ross Range's TheUnfathomable Ascent is a must-read for anyone interested in Adolf Hitler's march to power or the tragic fragility of democracy."—David King, New York Times Bestselling author of The Trial of Adolf Hitler