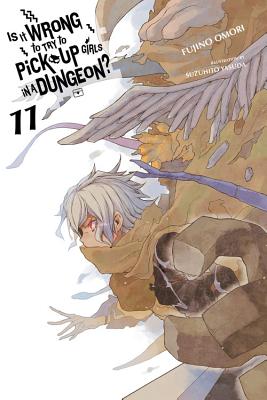 This is book number 11 in the Is It Wrong to Pick Up Girls in a Dungeon? series.

By far, this is the most exciting volume yet, completing not just the next major arc of the past couple of volumes, but also a major milestone for Bell. Bell's strength of character continues to shine in the face of unexpected hardships, while those who have come to know him put their faith in him as a leader despite the severity of the situation and his current title of 'traitor'. The ending of the volume was also unexpected, leaving a satisfying itch to continue reading the next volume to find out where the story will head next!

After saving the young dragon girl Wiene, Bell's name has become synonymous with "greedy", "despicable", and "traitor." He and his familia have completely lost the trust and respect of everyone residing in Orario. There's no time for him to feel sorry himself when his newfound monstrous friends, the Xenos, need his help to get home. But now that the the greatest obstacle in their way is Loki Familia, does Bell have what it takes to raise a fist against his beloved idol, the Sword Princess Aiz Wallenstein?

Fujino Omori is the author of the hilarious fantasy light novel series, Is it Wrong to Try to Pick Up Girls in a Dungeon?