The Day That Went Missing: A Family's Story (Hardcover) 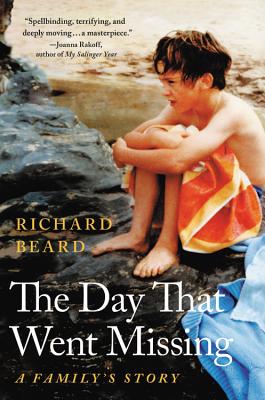 "Spellbinding, terrifying, deeply moving" -- an unflinching portrait of a family's silent grief, and the tragic death of a brother not spoken about for forty years (Joanna Rakoff).

On a family summer holiday in Cornwall in 1978, Richard and his younger brother Nicholas are jumping in the waves. Suddenly, Nicholas is out of his depth. One moment he's there, the next he's gone.

Richard and his other brothers don't attend the funeral, and incredibly the family returns immediately to the same cottage -- to complete the holiday, to carry on, in the best British tradition. They soon stop speaking of the catastrophe. Their epic act of collective denial writes Nicky out of the family memory.

Nearly forty years later, Richard, an acclaimed novelist, is haunted by the missing piece of his childhood, the unexpressed and unacknowledged grief at his core. He doesn't even know the date of his brother's death or the name of the beach where the tragedy occurred. So he sets out on a painstaking investigation to rebuild Nicky's life, and ultimately to recreate the precise events on the day of the accident.

The Day That Went Missing is a transcendent story of guilt and forgiveness, of reckoning with unspeakable loss. But, above all, it is a brother's most tender act of remembrance, and a man's brave act of survival.

Winner of the PEN/Ackerley Prize 2018

His latest novel, Acts of the Assassins was shortlisted for the Goldsmiths Prize in 2015. He is also the author of four books of narrative non-fiction. Formerly Director of The National Academy of Writing in London, he is a Visiting Professor at the University of Tokyo, and has a Creative Writing Fellowship at the University of East Anglia.

"Beard,
a novelist, takes a deeper look at the worst day of his family's life, when his
younger brother drowned during their seaside vacation; the examination is both
terribly moving and somehow life-affirming."—Boston Globe

"A memoir of real truth and heartbreaking emotional heft"—Sunday Times

"A touching, painful disquisition on memory and forgetting and the tendrils that tie us to the past."—Guardian

"This haunting book is a profoundly moving study of memory, denial and
grief."—Minneapolis Star Tribune

"Beard's
stunning memoir tells the tragic story of his family's 1978 vacation and the
subsequent 40 years he spent forgetting it.... [Beard's] beautifully written
story is heartbreaking and unforgettable as he struggles with the grief he
chose to forget and, now, attempts to remember again."—Publisher's Weekly

"Meticulously crafted and searingly honest, Beard's narrative is at once
a story about the long and difficult road to self-forgiveness and a commentary
on the wages of British emotional repression. A quietly brooding and intense
memoir of family and reckoning with the past."—Kirkus Reviews

"This is a fascinating book, the story of a child's
accidental death and how an English family dealt with it - or rather, didn't
deal with it. Clear-eyed, very sad, funny at times and, despite the story it tells, ultimately
uplifting in its determination to confront buried truths."—Sebastian Faulks, author of Birdsong and Where My Heart Used to Beat

"Spellbinding, terrifying, deeply moving, Richard Beard's The Day That Went Missing is a masterpiece. Fueled by Beard's dark humor and lacerating intelligence, this ferociously original memoir examines the ways in which we create mythologies to help us cope with unbearable tragedy. I basically stopped breathing on page one and didn't start again until I'd reached the book's devastating conclusion."—Joanna Rakoff, author of My Salinger Year

"Richard
Beard writes with the urgency and simplicity that attend a profound
relationship with grief, and in his struggle to understand his brother's death
he uses prose that rivets our attention, even as he both savors and examines a
wound he knows he will carry with him until the end of time."—Kate Mulgrew, actor and author of Born with Teeth