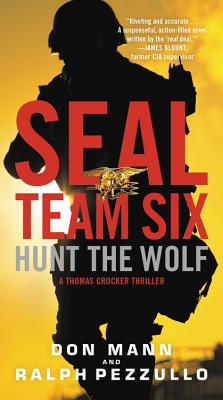 This is book number 1 in the A Thomas Crocker Thriller series.

In the midst of a grueling training exercise, Thomas Crocker, USN, unearths a pocket of terrorism that leads straight from the slopes of K2 to the cities of Europe and the Middle East. Crocker and his team, who are trained for the most intense kinds of combat in the most extreme environments, must blaze through a perilous web of terrorist cells to track down a ruthless sheikh who is running an international kidnapping ring before his captives pay the ultimate price.

Hunt the Wolf is an adrenaline-packed novel sure to appeal to fans of Vince Flynn and Brad Thor, featuring the world's most elite soldiers and based on the experiences of renowned SEAL Team 6 commando Don Mann.

Don Mann (CWO3, USN) is the author of the national bestseller Inside SEAL Team Six and a former Navy SEAL. He lives in Virginia.

"The authors gives nuance and depth to Crocker's character . . . The conclusion is satisfying, with Crocker going entertainingly superhuman. . . . For the Tom Clancy/Dale Brown genre fan, Mann and Pezzullo provide enough excitement to while away a weekend."—Kirkus Reviews

"The pace is relentless, and the inside knowledge of how the SEALs operate again gives this series its appeal. . . . For action fans, Crocker continues to deliver."—Jeff Ayers, Booklist

"Pulse-pounding reads filled with the kind of knowing, immersive detail that can only come from someone with real-life experience in the field. A great series."—Howard E. Wasdin, New York Times best-selling author of SEAL Team Six: Memoirs of an Elite Navy SEAL Sniper

"A riveting and accurate description of how special operations units actually conduct counterterrorist operations in the field. . . . If you are interested in reading a suspenseful, action-filled novel written by the 'real deal' instead of some amateur wanna-be, pick up this book, or any of those in the SEAL Team Six series."—James Blount, former supervisor at the Central Intelligence Agency