King of the Rising (Islands of Blood and Storm #2) (Paperback) 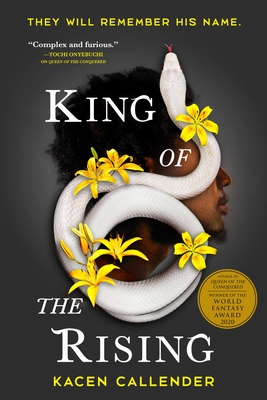 This is book number 2 in the Islands of Blood and Storm series.

King of the Rising is the searing conclusion to an unflinching and powerful Caribbean-inspired fantasy series about colonialism, resilience, and defiance.

A revolution has swept through the islands of Hans Lollik and former slave Loren Jannik has been chosen to lead the survivors in a bid to free the islands forever.

But the rebels are running out of food, weapons, and options. And as the Fjern inch closer to reclaiming Hans Lollik with every battle, Loren is faced with a choice that could shift the course of the revolution in their favor -- or doom it to failure.

Praise for Islands of Blood and Storm:

"A powerful look at colonialism, oppression, and rebellion, and all that it can cost the individuals involved." —Library Journal (starred review)

"The book's absorbing setting, captivating lead, and relevant themes of race and class complement each other with alternating delicacy and savagery."—NPR Books

"King of the Rising puts readers firmly into the minds of Callender’s unforgettable characters as it answers a spine-tingling set of questions: At the end of the war, who will survive and who will rule?” —BookPage

Kacen Callender was born two days after a hurricane and was first brought home to a house without its roof. After spending their first eighteen years on St. Thomas of the US Virgin Islands, Kacen studied Japanese, Fine Arts, and Creative Writing at Sarah Lawrence College and received their MFA from the New School. Kacen is the author of the middle grade novel Hurricane Child and the young adult novel This Is Kind of an Epic Love Story.

"Graphic action and violence; flawed protagonists; and a stark, storm-filled setting all combine into a riveting read. The second half of this duology is a powerful look at colonialism, oppression, and rebellion, and all that it can cost the individuals involved."—Library Journal

"Callender's heart-wrenching work is a story that refuses easy answers, trope saviors, or all-is-well endings. Lofty as it seems, if you imagine Hamlet and Agatha Christie's Ten Little Soldiers fused in a narrative that finds its soul from the pain of our cruelest histories, you'll have captured a piece of the powerful fantasy Callender has wrought in Queen of the Conquered."—Evan Winter, author of The Rage of Dragons on Queen of the Conquered

"A brilliant analysis of power and privilege set against an alternately beautiful and brutal background, you will root for Sigourney even as you question both her actions and motives. Searing and painful, Kacen Callender has managed to create a book that will stick with you long after the last page."—Justina Ireland, New York Times bestselling author of Dread Nation on Queen of the Conquered

"A fascinating exploration of how power corrupts and drives a person toward self-betrayal."—Kirkus (starred review) on Queen of the Conquered

"An ambitious, courageous, and unflinching novel that uncovers the rotten core of our colonial heritage and yet also celebrates the fierce resistance and heroic endurance of the most abused and exploited."—Kate Elliott, author of Black Wolves on Queen of the Conquered

"Callender's first adult novel draws race relations, conquest, magic, and politics into an imaginative, layered story that will keep readers twisting until the end. The author's personal experience growing up in St. Thomas lends to the rich setting and postcolonial themes."—Library Journal (starred review) on Queen of the Conquered

"From the very first paragraph, Callender's adult debut stuns. A complex and furious examination of colonialism, Queen of the Conquered is a storm of a novel as epic as Alexandre Dumas's The Count of Monte Cristo. I've been looking for this book half my life."—Tochi Onyebuchi, author of Beasts Made of Night on Queen of the Conquered

"Gripping and emotionally compelling; a stunning novel about power, privilege, and survival in a world where you must fight even after everything has been taken from you. If you can only read one book this year, make it Queen of the Conquered."—K. S. Villoso, author of The Wolf of Oren-Yaro on Queen of the Conquered

"Sinks its teeth in early and forces the reader to confront privilege and revenge through an electrifying voice. With an unforgettable ending, Queen of the Conquered is one of the most refreshing fantasies you'll read this year. There is simply nothing else like it."—Mark Oshiro, author of Anger is a Gift on Queen of the Conquered