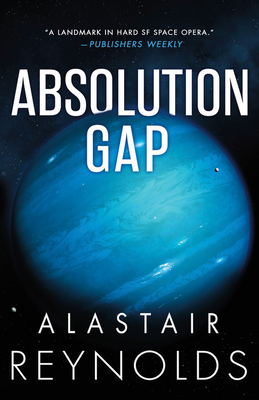 This is book number 3 in the The Inhibitor Trilogy series.

In the third book of the legendary Revelation Space trilogy, the last remnants of humanity realize that forging an alliance with a greater and even more mysterious alien force may be their only chance for survival.
The Inhibitors were designed to eliminate any life form reaching a certain level of intelligence -- and they've targeted Humanity. War veteran Clavain and a ragtag group of refugees have fled into hiding. Their leadership is faltering, and their situation is growing more desperate. But their little colony has just received an unexpected visitor: an avenging angel with the power to lead mankind to safety -- or draw down its darkest enemy.
And as she leads them to an apparently insignificant moon light-years away, it begins to dawn on Clavain and his companions that to beat one enemy, it may be necessary to forge an alliance with something much worse . . .
"Absolution Gap is a good as it gets, and should solidify Alastair Reynolds' reputation as one of the best hard SF writers in the field." -- SF Site

"Comparisons to Dune abound...At a time when large-scale SF is flourishing, Absolution Gap is a good as it gets, and should solidify Alastair Reynolds' reputation as one of the best hard SF writers in the field."—SF Site on Absolution Gap

"A book of great fascination, rich description, and memorable action."—Locus on Absolution Gap

"Reynolds writes a lean and muscular prose where the intense action scenes are leavened with the kind of bright, shining, mind-boggling science talk that characterizes the best of post-modern space opera."—Science Fiction Weekly on Absolution Gap

"Alastair Reynolds continues his rise to the top of SF...Revelation, Redemption, Absolution...Reynolds provides them all."—The Guardian (UK) on Absolution Gap

"Fulfills all the staggering promise of [Reynolds'] earlier books, and then some...a landmark in hard SF space opera."—Publishers Weekly on Absolution Gap