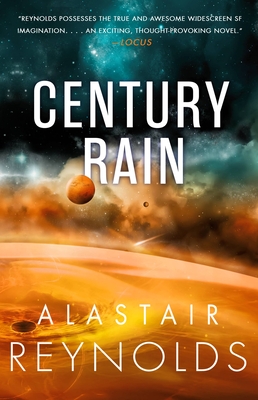 Part science fiction thriller, part interstellar adventure, and part noir crime, Century Rain is an astonishing international bestseller of "blistering powers and style" (SF Revu).
Three hundred years from now, Earth has been rendered uninhabitable due to the technological catastrophe known as the Nanocaust. Archaeologist Verity Auger specializes in the exploration of its surviving landscape. Now, her expertise is required for a far greater purpose. Something astonishing has been discovered at the far end of a wormhole: a mid-20th-century version of Earth, preserved like a fly in amber.
Somewhere on this alternate planet is a device capable of destroying both worlds at either end of the wormhole. And Verity must find the device, and the man who plans to activate it, before it's too late -- for the past and the future of two worlds.
Century Rain is a jaw-droppingly good SF thriller, packed with pace, adventure, brilliant storytelling and with twists that will keep you guessing to the end.

Alastair Reynolds was born in Barry, South Wales, in 1966. He studied at Newcastle and St. Andrews Universities and has a Ph.D. in astronomy. He stopped working as an astrophysicist for the European Space Agency to become a full-time writer. Revelation Space and Pushing Ice were shortlisted for the Arthur C. Clarke Award; Revelation Space, Absolution Gap, Diamond Dogs, and Century Rain were shortlisted for the British Science Fiction Award, and Chasm City won the British Science Fiction Award.

"An intelligent space opera."—Time Out on Century Rain

"A darkly brilliant love story set in worlds we think we know but don't."—The Guardian (UK) on Century Rain