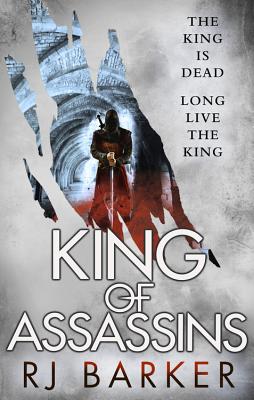 This is book number 3 in the The Wounded Kingdom series.

Twenty years ago, Girton began his journey to become the Tired Land's finest assassin and now he'll face his greatest challenge yet in the riveting conclusion to RJ Barker's debut epic fantasy trilogy.

Assassin Girton Club-Foot has lived in relative peace for many years, but now his king, Rufra ap Vthyr, eyes the vacant High-King's throne and will take his court to the capital. In a viper's nest of intrigue, the endgame of twenty years of politics and murder will be played out in the bid to become the King of all Kings.

Friends become enemies, enemies become friends, and the god of death stands closer than ever, casting his shadow over everyone Girton holds dear.

It's assassin versus assassin for the fate of a kingdom...

Praise for The Wounded Kingdom:

"Dead gods, dread magic, and a lead that feels like a breath of fresh air. Great fun."―Peter Newman, author of The Vagrant

"Often poignant and always intriguing, Age of Assassins reveals its mysteries with the style of a magic show and the artful grace of a gifted storyteller."―Nicholas Eames, author of Kings of the Wild

"The most interesting treatment of the fantasy assassin trope in a while, and an involving narrative in its own right."―RT Book Reviews

For more from RJ Barker, check out:

RJ Barker is a softly-spoken Yorkshireman with flowing locks. He lives in the frozen north with his wife and son, and divides his time between writing and looking after his son.

"For fans of action and political intrigue in the vein of Brent Weeks and Robin Hobb."—B&N Sci-Fi and Fantasy Blog

"Blood of Assassins is a brilliant and often beautiful piece of literature from one the most talented writers out there."—Fantasy Faction

"Outstanding. Beautifully written, perfectly paced and assured. Kept me reading well into the early hours of the morning. A wonderful first book -- a wonderful book, period -- that should be at the very top of your to-read list."—James Islington, author of The Shadow of What Was Lost on Age of Assassins

"Dead gods, dread magic, and a lead that feels like a breath of fresh air. Great fun."—Peter Newman, author of The Vagrant on Age of Assassins

"Often poignant and always intriguing, Age of Assassins reveals its mysteries with the style of a magic show and the artful grace of a gifted storyteller."—Nicholas Eames, author of Kings of the Wyld on Age of Assassins

"Simply unputdownable ... the perfect mix of fantasy and mystery."—Fantasy Book Review on Age of Assassins

"With an original, immersive world that wouldn't let me go and a pair of assassins worth rooting for, Age of Assassins is a pleasure to read. I can't wait for more!"—Melissa Caruso, author of The Tethered Mage on Age of Assassins

"A dark-humored game of cat and mouse between assassins with traitors on all sides."—David Dalglish, author of the Shadowdance series on Age of Assassins

"Age of Assassins builds a compelling fantasy world and peoples it with characters you can care about. Riddled with intrigue and dangerous magic, this is a hugely enjoyable debut."—Jen Williams, author of The Copper Promise on Age of Assassins

"Age of Assassins is a beguiling story of action and intrigue combined with a poignancy and humor that are as sharp as any blade."—Jon Skovron, author of Hope and Red on Age of Assassins

"Barker undercuts the standard fantasy cliche of the badass lone assassin ... The most interesting treatment of the fantasy assassin trope in a while, and an involving narrative in its own right."—RT Book Reviews on Age of Assassins

"This is one readers will find hard to put down."—Booklist on Age of Assassins