Estrogen Matters: Why Taking Hormones in Menopause Can Improve Women's Well-Being and Lengthen Their Lives -- Without Raising the Risk of Breast Cancer (Hardcover) 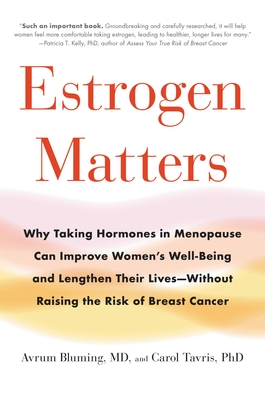 A compelling defense of hormone replacement therapy, exposing the faulty science behind its fall from prominence and empowering women to make informed decisions about their health.

For years, hormone replacement therapy (HRT) was hailed as a miracle. Study after study showed that HRT, if initiated at the onset of menopause, could ease symptoms ranging from hot flashes to memory loss; reduce the risk of heart disease, Alzheimer's, osteoporosis, and some cancers; and even extend a woman's overall life expectancy. But when a large study by the Women's Health Initiative announced results showing an uptick in breast cancer among women taking HRT, the winds shifted abruptly, and HRT, officially deemed a carcinogen, was abandoned.

Now, sixteen years after HRT was left for dead, Dr. Bluming, a medical oncologist, and Dr. Tavris, a social psychologist, track its strange history and present a compelling case for its resurrection. They investigate what led the public -- and much of the medical establishment -- to accept the Women's Health Initiative's often exaggerated claims, while also providing a fuller picture of the science that supports HRT.

A sobering and revelatory read, Estrogen Matters sets the record straight on this beneficial treatment and provides an empowering path to wellness for women everywhere.

Avrum Bluming, MD, is a hematologist and medical oncologist, and a Master of the American College of Physicians, an award bestowed on fewer than 500 of the 100,000 board-certified internists in the United States. He is Emeritus Clinical Professor of Medicine at the University of Southern California and a former senior investigator for the National Cancer Institute.

Carol Tavris, PhD, is a social psychologist who has written widely about psychological science. Her trade books include Anger; The Mismeasure of Woman; and, with Elliot Aronson, Mistakes Were Made (But Not by Me). She has won numerous awards for her science writing and contributions to skepticism and gender equity.

"How could one flawed scientific conclusion become a persuasive juggernaut that changed the practice of women's health worldwide? In their fascinating account, Bluming and Tavris challenge that conclusion and unpack the reasons for its remarkable impact."—Robert B. Cialdini, author of Influence

"Given breast cancer's substantial morbidity, mortality, emotional toll and the vast consequences of its treatment, the frontal salvo on the conventional wisdom of estrogen use by Avrum Bluming and Carol Tavris is refreshing and welcome. The book will stir a lively debate about the merits of decades of existing clinical research on estrogens and help reframe the way clinicians and patients view the tradeoff between the benefits and risks of hormone therapy."—Jerome P. Kassirer, MD, Distinguished Professor, Tufts University School of Medicine; Editor-in-Chief, New England Journal of Medicine

"This is such an important book, I want to do all I can to encourage every woman to read it. Groundbreaking and carefully researched, Estrogen Matters provides essential information about the many benefits of estrogen at menopause and even after a diagnosis of breast cancer. It reveals the misinterpretation of study results that led women (and their doctors) to have unwarranted concerns about estrogen use. The thoughtful information presented here will help women feel more comfortable taking estrogen, leading to healthier, longer lives for many."—Patricia T. Kelly, PhD, specialist in cancer risk assessment and author of Assessing Your True Risk of Breast Cancer

"This book is long overdue, and I salute the authors for their courage and effort (and their clear, witty writing). I believe it is an ethical imperative for all clinicians who treat women in menopause or women with breast cancer to alert their patients to this book. It will not only improve women's quality of life, but also, on balance of probabilities, extend women's lives by delaying death from all other causes."—Michael Baum, MD, professor emeritus of surgery and visiting professor of medical humanities, University College London

"Once considered a veritable fountain of youth, estrogen replacement got a bad rap with the Women's Health Initiative study. This book is an exhaustively researched and meticulously reasoned vindication of hormone replacement therapy. Estrogen matters: it's the most effective treatment for hot flashes and other symptoms of menopause, and when started early and used continuously, it has important health benefits and can actually prevent some of the adverse events it was thought to cause. Bluming and Tavris tell estrogen's story in a way that is both accessible to the general public and appropriate for professionals. What's more, they provide valuable insights into understanding research and how even the best randomized controlled studies can lead to unjustified public fears and injudicious clinical recommendations. Very enlightening!"—Harriet Hall, editor, Science-Based Medicine

"This book is long overdue. Having spent over two decades advancing women's health, I was appalled by the Women's Health Initiative's efforts to sensationalize and distort their own findings to promote an anti-hormone-therapy agenda. Personally I have been taking HRT for over 25 years and have no intention of stopping. I hope Estrogen Matters draws enough attention to counter the fears and misinformation about HRT that so many women, and their physicians, still hold."—Phyllis Greenberger, MSW, former President and CEO of the Society for Women's Health Research

"If you're one of the many menopausal women who reflexively avoid hormone replacement therapy to treat your symptoms because of all the scary headlines, this book is a must-read. The authors deftly cut through the hype to build a strong, well-reasoned case for challenging the current accepted wisdom."—Jennifer Ouellette, author of Me, Myself and Why and The Calculus Diaries

"For far too many years women and their doctors have been held in fear of prescribing estrogens -- believing that they were dangerous because of a widely quoted study purporting to show that they were too damaging. Now it turns out that this seems to have been an example of 'fake' news. In a thorough, careful, and unbiased assessment of all the scientific evidence, Bluming and Tavris debunk this most widely quoted work and show that estrogens are not only not dangerous but beneficial for the vast majority of women suffering from post-menopausal symptoms, whether or not they have had breast cancer. This extremely valuable message deserves to be widely disseminated."—Lord Turnberg, former President of the Royal College of Physicians