A Line in the Sand: A Novel (Hardcover) 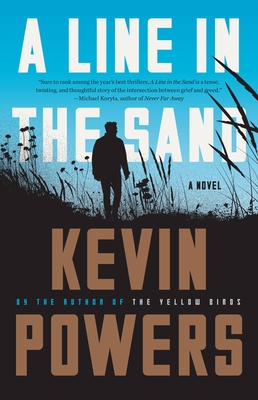 “A spellbinding and totally original thriller” (Philipp Meyer, author of The Son) by PEN/Hemingway Award winner of The Yellow Birds.

One early morning on a Norfolk beach in Virginia, a dead body is discovered by a man taking his daily swim—Arman Bajalan, formerly an interpreter in Iraq. After narrowly surviving an assassination attempt that killed his wife and child, Arman has been given lonely sanctuary in the US as a maintenance worker at the Sea Breeze Motel. Now, convinced that the body is connected to his past, he knows he is still not safe.

Seasoned detective Catherine Wheel and her newly minted partner have little to go on beyond a bus ticket in the dead man’s pocket. It leads them to Sally Ewell, a local journalist as grief-stricken as Arman is by the Iraq War, who is investigating a corporation on the cusp of landing a multi-billion-dollar government defense contract.

As victims mount around Arman, taking the team down wrong turns and towards startling evidence, they find themselves in a race, committed to unraveling the truth and keeping Arman alive—even if it costs them absolutely everything.

Kevin Powers is the author of The Yellow Birds, which won the PEN/Hemingway Award, the Guardian First Book Award, and was a National Book Award Finalist. He was born and raised in Richmond, Virginia, graduated from Virginia Commonwealth University, and holds an MFA from the University of Texas at Austin, where he was a Michener Fellow in Poetry. He served in the US Army in 2004 and 2005 in Mosul and Tal Afar, Iraq.

“Sure to rank among the year's best thrillers, A Line in the Sand is a tense, twisting, and thoughtful story of the intersection between grief and greed— and the human lives crushed in the middle. Kevin Powers writes with uncommon grace, delivering the rare novel that is both propulsive and contemplative, calling to mind writers as varied as Tim O'Brien and Michael Connelly.”—Michael Koryta, author of Never Far Away

“A riveting powerhouse of a book, A Line in the Sand pits two small town cops—and a mysterious Iraqi interpreter whose secrets have already gotten a lot of people killed—against corruption and violence at the highest levels of government. A spellbinding and totally original thriller; Kevin Powers has reinvented himself as novelist yet again.”—Philipp Meyer, author of The Son

“Powers has done it again. A Line in the Sand has it all: a kickass mystery with classic police procedural elements, originally drawn and memorable characters, but, most of all, a story with a huge heart and an underlying message that is sure to resonate widely. Enjoy the latest from a superb storyteller.”
—David Baldacci, author of The 6:20 Man

Praise for The Yellow Birds—

“The Yellow Birds is brilliantly observed and deeply affecting…a harrowing story about the friendship of two young men trying to stay alive on the battlefield in Iraq, and a philosophical parable about the loss of innocence and the uses of memory…Extraordinary.”—Michiko Kakutani, The New York Times

“Powers has created a powerful work of art that captures the complexity and life altering realities of combat service…it way up on that high rare shelf alongside Ernest Hemingway and Tim O'Brien.”—Anthony Swofford