The Hod King (The Books of Babel #3) (Paperback) 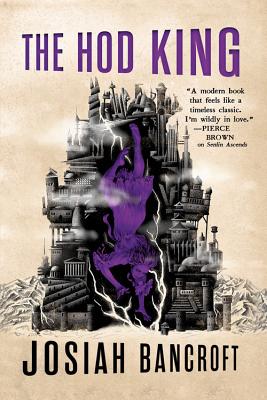 This is book number 3 in the The Books of Babel series.

Thomas Senlin and his crew of outcasts have been separated, and now they must face the dangers of the labyrinthine tower on their own in this third book in the word-of-mouth phenomenon fantasy series.

"One of my favorite books of all time." -- Mark Lawrence on Senlin Ascends
Fearing an uprising, the Sphinx sends Senlin to investigate a plot that has taken hold in the ringdom of Pelphia. Alone in the city, Senlin infiltrates a bloody arena where hods battle for the public's entertainment. But his investigation is quickly derailed by a gruesome crime and an unexpected reunion.

Posing as a noble lady and her handmaid, Voleta and Iren attempt to reach Marya, who is isolated by her fame. While navigating the court, Voleta attracts the unwanted attention of a powerful prince whose pursuit of her threatens their plan.

Edith, now captain of the Sphinx's fierce flagship, joins forces with a fellow wakeman to investigate the disappearance of a beloved friend. She must decide who to trust as her desperate search brings her nearer to the Black Trail where the hods climb in darkness and whisper of the Hod King.

As Senlin and his crew become further dragged in to the conspiracies of the Tower, everything falls to one question: Who is The Hod King?

Josiah Bancroft started writing novels when he was twelve, and by the time he finished his first, he was an addict. Eventually, the writing of Senlin Ascends began, a fantasy adventure, not so unlike the stories that got him addicted to words in the first place.

He wanted to do for others what his favorite writers had done for him: namely, to pick them up and to carry them to a wonderful and perilous world that is spinning very fast. If he's done that with this book, then he's happy.

Josiah lives in Philadelphia with his wife, Sharon, their daughter Maddie, and their two rabbits, Mabel and Chaplin.

"It's rare to find a modern book that feels like a timeless classic. I'm wildly in love with this book."—Pierce Brown, author of Red Rising on Senlin Ascends

"The Hod King is a compelling and original novel; the "Books of Babel" are something you hope to see perhaps once a decade - future classics, which may be remembered long after the series concludes."—Los Angeles Times

"Senlin Ascends is one of the best reads I've had in ages . . . I was dragged in and didn't escape until I'd finished two or three days later."
—Mark Lawrence, author of Prince of Thorns on Senlin Ascends

"Wonderfully unique and superbly well written. I loved every page."—Nicholas Eames, author of Kings of the Wyld on Senlin Ascends

"Senlin is a man worth rooting for, and his strengthening resolve and character is as marvelous and sprawling as the tower he climbs."—The Washington Post on Senlin Ascends

"What is remarkable about this novel, quite apart from its rich, allusive prose, is Bancroft's portrayal of Senlin, a good man in a desperate situation, and the way he changes in response to his experiences in his ascent."—The Guardian on Senlin Ascends

"Senlin Ascends crosses the everyday strangeness and lyrical prose of Borges and Gogol with all the action and adventure of high fantasy. I loved it, and grabbed the next one as soon as I turned the last page."
—Django Wexler, author of The Thousand Names on Senlin Ascends

"Senlin Ascends is an adventure rife with character, voice and beauty - a well-polished knife drawn out slowly."
—Sam Sykes on Senlin Ascends

"With deceptive simplicity Bancroft brings this gothic place and its denizens to a colourful life...I loved it!"—Adrian Selby, author of Snakewood on Senlin Ascends

"Senlin Ascends is a unique masterpiece. A brilliant debut. Highly recommended!"—Michael R. Fletcher, author of Beyond Redemption on Senlin Ascends

"This is fantasy storytelling of a high order."—The Toronto Star on Senlin Ascends

"Brilliant debut fantasy . . . This novel goes off like a firework and suggests even greater things in the author's future."
—Publishers Weekly, starred review on Senlin Ascends

"Ticks along with the tight precision and artistry of a well-wound watch."
—Kirkus on Senlin Ascends

"This is an exceedingly rich book. A depth of imagination married with a poetic turn of phrase and an engaging cast of characters conspire to deliver an epic story soaring high above the clouds."—Fantasy Faction on Senlin Ascends

"Like a blend of Kafka's The Castle and Mervyn Peake's Gormenghast, Josiah Bancroft's ambitious first chapter in his The Books of Babel series is an impressive display of imagination and humor."—SciFiNow on Senlin Ascends