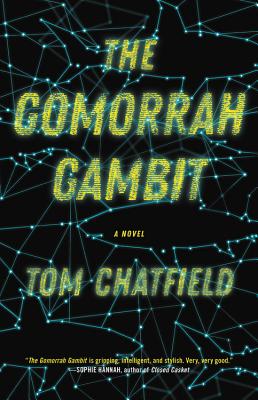 By Tom Chatfield
$30.24
Not Available

With dark technology hollowing out global privacy, an elite hacker enters the belly of the beast in this "gripping, intelligent, and stylist" international conspiracy thriller (Sophie Hannah, author of Closed Casket).
Azi Bello is an amiable outsider with a genius for hacking. Having spent the better part of his life holed up in a shed in his backyard, Azi has become increasingly enmeshed in the dark side of the internet. With the divide between online and offline worlds vanishing, so too is the line between those transforming civilization through technology and those trying to bring it to its knees. Dark networks rule. Someone with the right connections can access to anything imaginable, and power is theirs for the taking-although even they can't know what kind of bargain they've struck.
Tipped off by a secretive young woman named Munira, Azi sets out to unravel the mysterious online marketplace known as Gomorrah, sacrificing his carefully constructed privacy in the process. Munira's life is spiraling out of control: her cousins recruited to work for a terrorist state that's hunting them both, her destiny in Azi's hands. Her desperation drags Azi into the field where, working together, the two uncover an unimaginable conspiracy.
As pressure mounts, Azi has no choice but to take on the ultimate infiltration. In an age when identities can be switched at will and nobody is who they seem, how far will he go to end the nightmare?

Dr Tom Chatfield is a British writer, broadcaster and tech philosopher. Interested in using digital technology to improve our experiences, his past books, including Netymology, explore digital culture and have appeared in over two dozen countries and languages. He lives near London with his family.

"An accomplished and chilling high-tech thriller...Chatfield writers with real skill, intelligence, and humor...Readers will look forward to his next foray into fiction."—Publishers Weekly, starred review, book of the week pick

"A nonstop thriller that will be a particular treat for high-end techies."—Booklist

"The Gomorrah Gambit is a rollicking good cyber thriller-one to make William Gibson proud. And, but, it's more than that too. Tom Chatfield deftly inserts his encyclopedic knowledge of hacker history and prehistory into the headlong forward motion of this story, and the critical mass that discreetly builds up amounts to a prediction of the future. That's an aspect which might encourage us to exert a little choice on that future... while we still can."—Madison Smartt Bell, author of All Souls' Rising and Behind the Moon

"Tech philosopher Chatfield paints a picture of the deadly scenario that skilled hackers seeking world domination are capable of creating. . . . A nonstop thriller that will be a particular treat for high-end techies."—Booklist

"Propulsive . . . A complex but imaginative techno-thriller . . . It's full of cinematic set pieces including gunplay, kidnapping, and killer robots. . . . The pensive author is also pointing out the futuristic dangers--identity theft, social engineering, virtual reality, and video manipulation among them--that are already upon us. A thoughtful but fast-paced techno-thriller that takes many of SF's most frightening ideas and extrapolates them into our evolving reality."—Kirkus Reviews

"Tom Chatfield had already written several nonfiction books about the intersection of technology and philosophy even before he entered the work of fiction, so we expect his debut thriller of hackers, dark tech, and international intrigue to be nothing short of stunning."—Crime Reads

"There is so much to love in this breakneck speed techno-thriller."—Emma Cazabonne, Criminal Element

"A techno-thriller with wit and style. It reminded me of Chris Brookmyre, and praise doesn't come higher than that."—Mick Herron, author of Slow Horses

"If espionage today is all about hack and counter-hack, which it clearly is, then Tom Chatfield has just written the classic twenty-first century spy thriller. Move over James Bond: Azi Bello has hacked your smartphone and he owns you."—Michael Ridpath, author of The Wanderer

"Tom Chatfield's The Gomorrah Gambit is fast and funny, dangerous and blinding-bright. It's a thriller about hackers and terrorism, but it's also a novel about the intersection of virtual worlds and the worlds of religious fanaticism, government agencies, and armies-where real people fight and bleed real blood, where they die real deaths. The Gomorrah Gambit is an adrenalin-rush of a book for our menacing times."—Paul Cody, author of Shooting the Heart

A seething knot of spies, hackers, terrorists, tech and humans: absolutely brilliant.—Carl Miller, author of The Death of the Gods

I read this from behind the sofa... I can't think of a better way to learn about hacking and the dark web . . . Halfway between a TED talk and rollercoaster!—Philippa Perry, author of The Book You Wish Your Parents Had Read

A stunning debut thriller from one of Britain's leading tech gurus. Page-turning, tech savvy and written with literary flair...I couldn't put it down.—Roman Krznaric, author of Empathy: Why It Matters and How to Get it

Tom Chatfield is a writer's writer. From deep inside tech culture, he has created a narrative that will hook and entertain you from first to last page. I look forward to more.—Dom Sagolla, co-creator of Twitter and author of 140 Characters

It's almost impossible to believe that a book this thrilling and in-sync with cutting-edge themes of surveillance, security, and social engineering is Tom Chatfield's debut novel. Beyond mastering the art of the page-turner, Chatfield manages to explore a deep existential question without ever breaking from the fast-paced story—Evan Selinger, professor of philosophy at the Rochester Institute of Technology and coauthor of Re-Engineering Humanity

The Gomorrah Gambit is both thrilling and searing, entertaining and wholly unique...You'll look at your phone and laptop much differently after reading the last pages of this brilliant novel—Raymond Villareal, author of The People's History of the Vampire Uprising

Punchy, powerful and one hell of a wild ride, this is thriller writing at its absolute best.—Chris Whitaker, author of All the Wicked Girls

"The Gomorrah Gambit by Tom Chatfield is a sharp thriller that takes us deep into the digital underworld. Taut and tense, The Gomorrah Gambit is a well told, fast-paced story packed with contemporary relevance."—Adam Hamby, author of the Pendulum Trilogy

"Tom Chatfield's debut novel is a swift and spiky view of modern dark web espionage, with a great voice and engaging characters."—James Swallow, author of Nomad