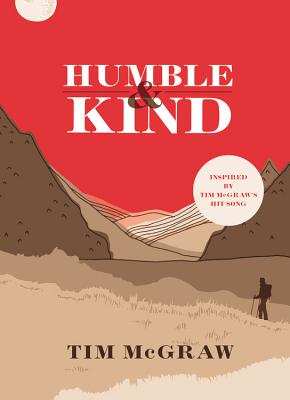 What if practical inspiration could be as simple as an eye-opening, heartfelt song?

Humble and Kind is the keepsake hardcover volume that combines the emotional power of Tim McGraw's uplifting #1 single and video "Humble and Kind" to elegant line illustrations in a gift book for all seasons. Inspired by McGraw's own life experience as his eldest child embarked on her college career, every parent and graduate can relate to Humble and Kind; with tender clarity, the words reinforce lessons for mindful, compassionate living.

The song's pure poetry not only propelled the single up the charts, but its accompanying video-gorgeously produced with images courtesy of Oprah Winfrey's documentary "Belief" -has been viewed by tens of millions since its release, and inspired a community movement at stayhumbleandkind.com. Featuring an introduction from McGraw and an epilogue by the songwriter Lori McKenna, Humble and Kind is a deeply affecting call to action, and the perfect memento for millions of graduates, parents, and children across the continent.