Give Me Your Hand (Paperback) 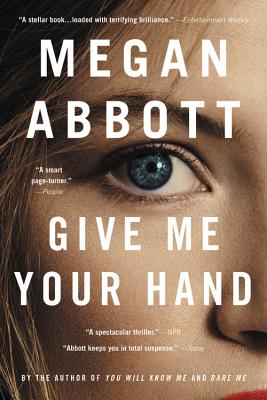 A life-changing secret destroys an unlikely friendship in this "magnetic" psychological thriller from the Edgar Award-winning author of Dare Me and The Turnout (Meg Wolitzer).

You told each other everything. Then she told you too much.

Kit has risen to the top of her profession and is on the brink of achieving everything she wanted. She hasn't let anything stop her.

But now someone else is standing in her way: Diane. Best friends at seventeen, their shared ambition made them inseparable. Until the day Diane told Kit her secret -- the worst thing she'd ever done, the worst thing Kit could imagine -- and it blew their friendship apart.

Kit is still the only person who knows what Diane did. And now Diane knows something about Kit that could destroy everything she's worked so hard for.

How far would Kit go to make the hard work, the sacrifice, worth it in the end? What wouldn't she give up? Diane thinks Kit is just like her. Maybe she's right. Ambition: it's in the blood . . .

Megan Abbott is the award-winning author of nine novels, including You Will Know Me, The Fever, Dare Me, and The End of Everything. She received her PhD in literature from New York University. Her writing has appeared in the New York Times, the Wall Street Journal, the Los Angeles Times Magazine, The Guardian, and The Believer. Currently, she is a staff writer on HBO's David Simon show, The Deuce. She lives in New York City.

"The latest thriller from the ever-impressive Megan Abbott....Abbott sows suspense by shifting between past and present, demonstrating how life's earlier acts affect future ones."—Wall Street Journal

"A spectacular thriller . . . Give Me Your Hand is a nuanced and atmospheric story about the lure of big dreams, especially for women."—NPR's Fresh Air

"Abbott proves she's still the queen of uncovering the dark complexity of the female psyche with her new novel."—Los Angeles Review of Books

"Trust the nimble Abbott to elevate this smart page-turner beyond catfight into a tense battle between morality and ambition."—People, Book of the Week

"[Give Me Your Hand] should cement [Abbott's] position as one of the most intelligent and daring novelists working in the crime genre today."—Ruth Ware, New York Times Book Review

"[A] nuanced tale of soured friendships, blood-soaked ambition, and desperate murders from Thriller Award-winner Abbott...No writer can touch Abbott in the realm of twisted desire and relationships between women, both intimate and feral."—Publishers Weekly, starred review

"This is a stellar book...This book is loaded with terrifying brilliance, and it's one of my very favorite Abbott reads for the way it so sharply fuses its setting to its characters and ideas."—Entertainment Weekly

"In Abbott's deft hands, friendship is fused to rivalry, and ambition to fear, with an unsettling level of believability. It will take more than a cold shower to still the blood thumping in your ears when you finish this."—Kirkus, Starred Review

"In Give Me Your Hand, Abbott again shows why she's one of our best story tellers"—Associated Press

"Once again, Abbott plunges us deep into a vividly realized world of intense competition and creates life-or-death stakes where we wouldn't have known to look for them...this is a brilliant riff on hard science, human nature, and the ultimate unknowability of the human brain."—Booklist, Starred Review

"Smart, twisty, penetrating - I literally could not put this book down"—Pop Sugar, "The 25 New Books to Put in Your Beach Bag This Summer"

"This is Megan Abbott at her very best. Cool, crisp, chilling."—Paula Hawkins, author of the #1 New York Times Bestseller The Girl on the Train

"A white-hot look at the ways in which envy perverts ambition, and our secrets make us sick, Give Me Your Hand is the ultimate unsettling read of the summer."—Nylon

"It will take more than a cold shower to still the blood thumping in your ears when you finish this."—Kirkus

"Give Me Your Hand is further proof that Megan Abbott is the 21st century's answer to Patricia Highsmith--she has that uncanny insight into the dark and treacherous depths of the human heart."—Dan Chaon, bestselling author of Ill Will

"SO. GOOD. A tense, pitch-perfect thriller about ambition and female friendship and a forensic examination of what it takes for women to rise through male-dominated spaces. It felt in places like a dark inversion of The Secret History."—Erin Kelly, author of He Said/She Said

"Give Me Your Hand is dark, smart, twisty, and thoroughly addictive. No one maps the thrilling and sometimes dangerous intensity of female friendships better than Megan Abbott."—Tom Perotta, bestselling author of Mrs. Fletcher and Little Children

"While Megan Abbott's magnetic new novel mines themes of ambition, competition, excellence, and friendship, what perhaps struck me the most was its exploration of the long, undeterrable reach of memory. Give Me Your Hand is darkly effective, uneasy-making, and beautifully, absorbingly written."—Meg Wolitzer, bestselling author of The Interestings and The Female Persuasion

"Megan Abbott manages to be a master of suspense, a gifted literary novelist, and a brilliant voice on gender, power, and obsession, all at once. Give Me Your Hand is mesmerizing."—J. Courtney Sullivan, bestselling author of Saints for All Occasions and Mine

PRAISE FOR YOU WILL KNOW ME:


"[Abbott] is in top form in this novel. She resumes her customary role of black cat, opaque and unblinking, filling her readers with queasy suspicion at every turn."
—Jennifer Senior, New York Times

"...brilliant...beneath the glittering carapace of Abbott's lush, skillful, subtle writing, it's impossible to know what we're supposed to think. One of the strengths of this novel is that it doesn't mind what we believe--it is cooly at peace with whatever our take on matters might be...we, as readers, are made entirely responsible for our own theories and conclusions. In that sense, this is an exceptionally plausible work of fiction...The wrong kind of ambiguity in a crime novel can be fatal. Abbott judges it impeccably here..all of this Abbott pulls off with groundbreaking skill...excellent."
—Sophie Hannah, New York Times Book Review

"Taut and raw, this is a mesmerizing story from a master of suspense."—Kim Hubbard, People

"It's Abbott's psychological smarts that make You Will Know Me such a standout...Abbott steadily commands our attention with a suspense plot that unexpectedly somersaults and back flips whenever a landing seems in sight."—Maureen Corrigan, Washington Post

"Megan Abbott has written a book with the taut and muscular ruthlessness of a gymnast, a book that disorients with eerie countermelodies...You Will Know Me takes swift, unsettling, apparently effortless flight."—Annalisa Quinn, NPR.org

"Master of mystery Abbott...brings her noir sensibility to the world of elite teen gymnastics."
—Entertainment Weekly

"Abbott commands our attention with a plot that somersaults and back flips whenever a safe landing seems in sight. But what's even more ingenious is how artfully her novel draws us readers into that closed world of BelStars Gym...You Will Know Me is a terrific accompaniment to this summer's Olympic frenzy. It's an all-around winner."
—Maureen Corrigan, NPR's Fresh Air

"Almost unbearably tense, chilling and addictive, You Will Know Me deftly transports the reader to the hyper-competitive arena of gymnastics where the dreams and aspirations of not just families but entire communities rest on the slender shoulders of one teenage girl. Exceptional."—Paula Hawkins, author of The Girl on the Train

"Is there anything Megan Abbott can't do? We will have to wait for the answer to that question because You Will Know Me continues her formidable winning streak. This story of an ordinary family with an extraordinary child is gorgeously written, psychologically astute, a page-turner that forces you to slow down and savor every word. And yes--please forgive me--she totally sticks the landing."—Laura Lippman, New York Times bestselling author of Hush Hush

"Megan Abbott's latest thriller plunges readers into the shockingly realistic life of young, female gymnasts whose severely regulated lives come with unthinkable consequences. Gritty, graphic, and yet beautiful and dreamlike in the way the story unfolds, You Will Know Me comes barreling at you with all the power and urgency of a high-speed train, as Abbott asserts herself as one of the greatest crime writers of our time."—Mary Kubica, New York Times bestselling author of The Good Girl

"If, then, you are secretly craving a modicum of drama to go with your women's gymnastics, you should read Megan Abbott's leotard-centric You Will Know Me...the style of her prose, and her focus on teen-age desire, ambition, and secrecy, have a broad, cinematic appeal."
—Jia Tolentino, The New Yorker