Eleanor Roosevelt: In Her Words: On Women, Politics, Leadership, and Lessons from Life (Hardcover) 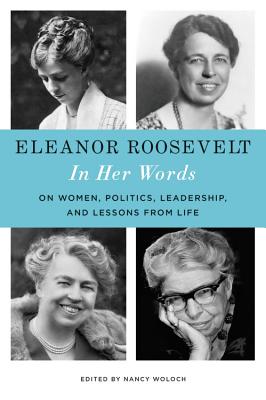 This illustrated, first of its kind collection of excerpts from Eleanor Roosevelt's newspaper columns, radio talks, speeches, and correspondence speaks directly to the challenges we face today.

Using excerpts from her books, columns, articles, press conferences, speeches, radio talks, and correspondence, Eleanor Roosevelt: In Her Words tracks her contributions from the 1920s, when she entered journalism and public life; through the White House years, when she campaigned for racial justice, the labor movement, and "the forgotten woman;" to the postwar era, when she served at the United Nations and shaped the Universal Declaration of Human Rights. Selections touch on Roosevelt's early entries in women's magazines ("Ten Rules for Success in Marriage"), her insights on women in politics ("Women Must Learn to Play the Game As Men Do"), her commentary on World War II ("What We Are Fighting For"), her work for civil rights ("The Four Equalities"), her clash with Soviet delegates at the UN ("These Same Old Stale Charges"), and her advice literature ("If You Ask Me"). Surprises include her unique preparation for leadership, the skill with which she defied critics and grasped authority, her competitive stance as a professional, and the force of her political messages to modern readers.

Scorning the "America First" mindset, Eleanor Roosevelt underlined the interdependence of people and of nations. Eleanor Roosevelt: In Her Words illuminates her achievement as a champion of civil rights, human rights, and democratic ideals.

Nancy Woloch is the author of Women and the American Experience and A Class By Herself: Protective Laws for Women Workers, winner of the Philip Taft Prize in labor History, the William G. Bowen Prize, and honorable mention for the David J. Langum Prize in legal History. She is a member of the history department at Barnard College, Columbia University.

Eleanor Roosevelt (1884-1962) was an American politician, diplomat, and activist. She was the longest-serving First Lady of the United States, holding the post from March 1933 to April 1945. She made Gallup's list of "People that Americans Most Widely Admired in the 20th Century," and Time's "The 25 Most Powerful Women of the Past Century."

"Eleanor Roosevelt's words and vision are urgently needed now! In this splendidly illustrated collection, the highlights of her many writings enable us to go shoulder-to-shoulder with ER into this embattled moment: hearts open, fists high."—BLANCHE WIESEN COOK, distinguished professor at John Jay College and author of a prize-winning three-volume biography of Elanor Roosevelt.

"Eleanor Roosevelt never goes out of style. One of the 20th century's most admired public figures, her words still speak to us today. Thanks to Nancy Woloch's richly evocative compilation, Eleanor Roosevelt can serve as a role model for future generations as well."—SUSAN WARE, general editor of American National Biography and author of Beyond Suffrage: Women in the New Deal

"Framed by Nancy Woloch's beautifully crafted introduction and commentary, these selections from Eleanor Roosevelt's writings speak to us with fresh force."—ROSALIND ROSENBERG, author of Jane Crow: The Life of Pauli Murray

"Woloch has performed a needed service in these days of ugly political theater. This work shows how Roosevelt used public communication to challenge the status quo with a clear message of morality, good will, and common decency as vital today as it was in her era."—MAURINE BEASLEY, author Eleanor Roosevelt: Transformative First Lady

"Always wise - often refreshingly warm and witty - these excerpts from Eleanor Roosevelt's published writings, speeches, and letters offer fresh insight into her own troubled times and a welcome tonic for our own."—ELLEN CHESLER, senior fellow at the Roosevelt Institute

"An exhilarating, insightful, and timely introduction to Eleanor Roosevelt, her life, ideas, and the actions she took to change the course of politics and history."—LIZ ABZUG, founder and president of the Bella Abzug Leadership Institute