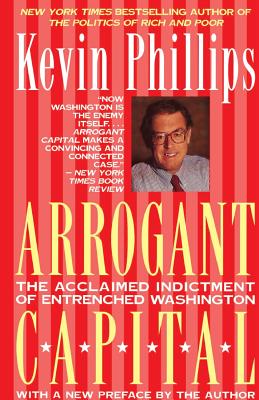 Everyone knows that Washington is completely out of touch with the rest of the country. Now Kevin Phillips, whose bestselling books have prophesied the major watersheds of American party politics, tells us why. Washington - mired in bureaucracy, captured by the money power of Wall Street, and dominated by 90,000 lobbyists, 60,000 lawyers, and the largest concentration of special interests the world has ever seen - has become the albatross that Thomas Jefferson and our other Founding Fathers feared: a swollen capital city feeding off the country it should be governing. Throughout most of our history, the genius of American politics was that ballot revolutions every generation swept out failed establishments and created new ones. Now that can no longer happen. Feared and even hated by a majority of the citizenry, "Permanent Washington" has dug in. Using history as a chilling warning, Kevin Phillips parallels the present atrophy to that of formerly mighty and arrogant capitals like Rome, Madrid, andAmsterdam.,Unchecked, Washington will - like other great powers before it - lead the country to its inevitable decline and fall. To work again, Washington must be purged and revitalized. In his unique blueprint for a political upheaval, Kevin Phillips puts Washington on notice by sounding a cry for immediate action, offering us a wide variety of remedies - some quasi-revolutionary, others more moderate, but all sure to be controversial.