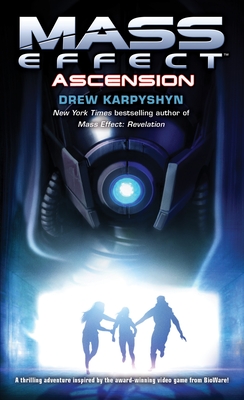 This is book number 2 in the Mass Effect series.

When they vanished fifty thousand years ago, the Protheans left their advanced technology scattered throughout the galaxy. The chance discovery of a Prothean cache on Mars allows humanity to join those already reaping the rewards of the ancients’ high-tech wizardry. But for one rogue militia, the goal is not participation but domination.

Scientist Kahlee Sanders has left the Systems Alliance for the Ascension Project, a program that helps gifted “biotic” children harness their extraordinary powers. The program’s most promising student is twelve-year-old Gillian Grayson, who is borderline autistic. What Kahlee doesn’t know is that Gillian is an unwitting pawn of the outlawed black ops group Cerberus, which is sabotaging the program by conducting illegal experiments on the students.

When the Cerberus plot is exposed, Gillian’s father takes her away from the Ascension Project and flees into the lawless Terminus Systems. Determined to protect Gillian, Kahlee goes with them… unaware that the elder Grayson is, in fact, a Cerberus operative. To rescue the young girl Kahlee must travel to the farthest ends of the galaxy, battling fierce enemies and impossible odds. But how will she be able to save a daughter from her own father?

This novel is based on a Mature-rated video game.

Drew Karpyshyn is the New York Times bestselling author of Star Wars: Darth Bane: Path of Destruction and its sequel Star Wars: Darth Bane: Rule of Two, as well as several other fantasy and science fiction novels, including Mass Effect: Revelation. He is also an award-winning writer/designer for the computer game company BioWare, where he was lead writer on Mass Effect and the popular Star Wars: Knights of the Old Republic video game. He can be contacted through his website at www.drewkarpyshyn.com–it’s all Drew, all the time!