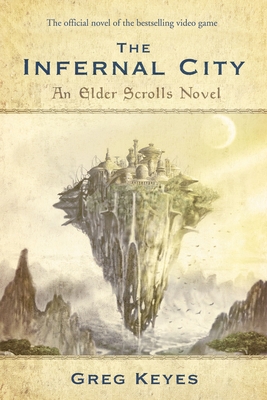 This is book number 1 in the The Elder Scrolls series.


Based on the award-winning The Elder Scrolls, The Infernal City is the first of two exhilarating novels following events that continue the story from The Elder Scrolls IV: Oblivion, named 2006 Game of the Year.

Four decades after the Oblivion Crisis, Tamriel is threatened anew by an ancient and all-consuming evil. It is Umbriel, a floating city that casts a terrifying shadow—for wherever it falls, people die and rise again.

And it is in Umbriel’s shadow that a great adventure begins, and a group of unlikely heroes meet. A legendary prince with a secret. A spy on the trail of a vast conspiracy. A mage obsessed with his desire for revenge. And Annaig, a young girl in whose hands the fate of Tamriel may rest . . . .

Born in Meridian, MS, in 1963, Greg Keyes spent his early years roaming the forests of his native state and the red rock cliffs of the Navajo Indian reservation in Arizona. He earned his B.A. in anthropology from Mississippi State University and a master's degree from the University of Georgia, where he did course work for a Ph.D. He lives in Savannah, GA, where, in addition to full-time writing, he enjoys cooking, fencing, the company of his family and friends and lazy Savannah nights. Greg is the author of The Waterborn, The Blackgod, the Babylon 5 Psi Corps trilogy, the Age of Unreason tetrology (for which he won the prestigious "Le Grand Prix de l'Imaginaire" award), and three New York Times bestselling Star Wars novels in the New Jedi Order series.