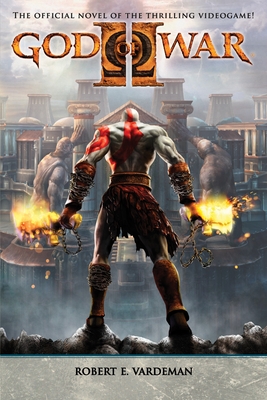 All the majesty and mayhem of Greek mythology springs to life once more in the powerful second novel based on the bestselling and critically acclaimed God of War® franchise.

Once the mighty warrior Kratos was a slave to the gods, bound to do their savage bidding. After destroying Ares, the God of War, Kratos was granted his freedom by Zeus—and even given the ousted god’s throne on Olympus.

But the other gods of the pantheon didn’t take kindly to Kratos’s ascension and, in turn, conspired against him. Banished, Kratos must ally himself with the despised Titans, ancient enemies of the Olympians, in order to take revenge and silence the nightmares that haunt him.

God of War II takes the videogame’s action to electrifying new heights, and adds ever more fascinating layers to the larger-than-life tale of Kratos.

Robert E. Vardeman is a veteran science fiction, fantasy, and media tie-in writer. He is celebrated for his original fiction as well as his licensed fiction, including several Star Trek novels. He also collaborated with Matt Stover on the first God of War novel.