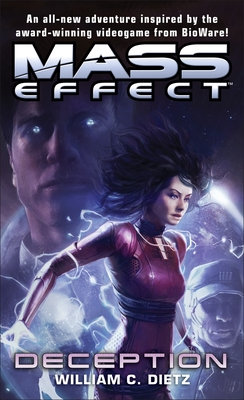 An all-new adventure inspired by the award-winning videogame from BioWare!

The universe is under siege. Every fifty thousand years, a race of sentient machines invades our galaxy to harvest all organic life-forms. They are the Reapers.

Two people who know the truth are desperately searching for a way to stop the cycle: Navy admiral David Anderson and his partner, Kahlee Sanders. They have uncovered grisly evidence proving that the Reaper threat is real. But in so doing they have exposed the machinations of Cerberus, a secretive paramilitary organization, and its mysterious leader, the Illusive Man—putting David and Kahlee in mortal danger, for Cerberus will stop at nothing to protect its secrets.

But along the way, they find an unlikely ally in Gillian Grayson, a young woman with extraordinary powers. Once the subject of horrifying scientific experiments, Gillian is now free—and beginning to master her deadly abilities. But after learning that Cerberus was responsible for the death of her father, Gillian swears vengeance against the group and the Illusive Man—threatening to unravel everything Kahlee and David are fighting for.

William C. Dietz is the bestselling author of Resistance: The Gathering Storm, HALO: The Flood, and Hitman: Enemy Within, plus thirty other science fiction novels, some of which have been translated into German, Russian, and Japanese. He grew up in the Seattle area, served as a medic with the navy and the Marine Corps, and graduated from the University of Washington. Dietz worked as a surgical technician, news writer, college instructor, television producer, and director of public relations for an international telephone company prior to embarking on a full-time writing career.