Ice: A Memoir of Gangster Life and Redemption-from South Central to Hollywood (Paperback) 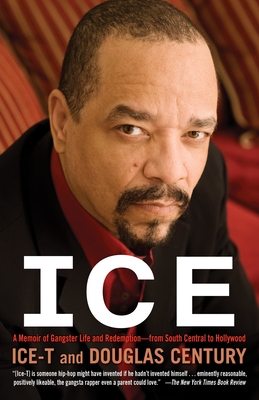 He’s a hip-hop icon credited with single-handedly creating gangsta rap. Television viewers know him as Detective Odafin “Fin” Tutuola on the top-rated drama Law & Order: SVU. But where the hype and the headlines end, the real story of Ice-T—the one few of his millions of fans have ever heard—truly begins. Ice is Ice-T in his own words—raw, uncensored, and unafraid to speak his mind. About his orphan upbringing on the gang-infested streets of South Central, his four-year stint in the U.S. Army, his successful career as a hustler and thief, and his fateful decision to turn away from a life of crime and forge his own path to international stardom. Along the way, Ice shares never-before-told stories about friends such as Tupac, Dick Wolf, Chris Rock, and Flavor Flav, among others. And he offers up candid observations on marriage and monogamy, the current state of hip-hop, and his latest passion: mentoring at-risk youths around the country. With insights into the cutthroat world of the street—and the cutthroat world of Hollywood—Ice is the unforgettable story of a true American original.

Tracy Marrow a/k/a Ice-T was born in New Jersey. As an only child whose parents died when he was very young, Ice-T became involved in Los Angeles gangs before spending four years in the army. He released a string of groundbreaking West Coast rap records and formed the thrash-metal band Body Count, whose 1991 self-titled debut contained the controversial single “Cop Killer.” He currently stars as Detective Fin Tutuola on Law & Order: SVU.

Douglas Century is the author of Barney Ross: The Life of a Jewish Fighter and Street Kingdom: Five Years Inside the Franklin Avenue Posse, and is the co-author of the New York Times bestsellers Takedown and Under and Alone. He has written frequently for The New York Times, among many other publications, and is a contributing editor at Tablet Magazine.

“In his spare, plainspoken autobiography, Ice-T speaks freely and unapologetically. . . . Ice is a good name for this memoir—its writer is a cool cat.”—Los Angeles Times

“Ice-T, in short, is someone hip-hop might have invented if he hadn’t invented himself. . . . Ice showcases an eminently reasonable, positively likeable guy, the gangsta rapper even a parent could love.”—The New York Times Book Review

“A fascinating memoir, the pages of which are jam-packed with tales of a guy who ‘actively did everything I rhymed about.’ ”—Associated Press