Fable: Edge of the World (Paperback) 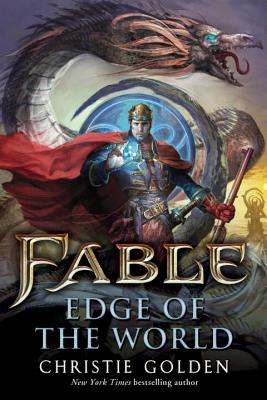 By Christie Golden
$16.80
Not Available

The official prequel novel to the Xbox 360 videogame, Fable:™ The Journey

It’s been almost a decade since the events of Fable 3, when the Hero vanquished the threat across the sea and claimed his throne. As king he led Albion to an era of unprecedented peace and prosperity. But on the night of his wedding to his new queen, ominous word arrives: The darkness has returned.

Beyond a harrowing mountain pass, the exotic desert country Samarkand has been overrun by shadowy forces. Within the walls of its capital city, a mysterious usurper known only as the Empress has seized control. To protect his realm, the king must lead his most trusted allies into a strange land unknown to outsiders. As they forge ahead along Samarkand’s ancient Great Road, populated by undead terrors and fantastic creatures once believed to be the stuff of legend, the king is drawn ever closer to his greatest challenge yet.

But soon Albion is engulfed in a war of its own. As the darkness spreads, town by town, a treacherous force has infiltrated the queen’s circle. Now the fate of all that is good rests with a faint flicker of hope . . . that somewhere, somehow, heroes still do exist.

© 2012 Microsoft Corporation. All Rights Reserved. Microsoft, Fable, Lionhead, the Lionhead logo, Xbox, and the Xbox logo are trademarks of the Microsoft group of companies.

Christie Golden is the award-winning New York Times bestselling author of nearly sixty books and more than a dozen short stories in the fields of fantasy, science fiction, and horror. Her media tie-in works include her first novel, Vampire of the Mists, which launched TSR’s game line; more than a dozen Star Trek novels; the Fate of the Jedi novels Omen, Allies, and Ascension as well as standalone novels Dark Disciple and Battlefront II: Inferno Squad. For Blizzard Entertainment, she's contributed five StarCraft novels, including the Dark Templar trilogy, and the Warcraft/World of Warcraft books Lord of the Clans, Rise of the Horde, Arthas: Rise of the Lich King, War Crimes, Before the Storm and Exploring Azeroth: Eastern Kingdoms. In 2017, she was awarded the International Association of Media Tie-in Writers Faust Award and named a Grandmaster in recognition of thirty years of writing. She currently works full-time for Blizzard Entertainment, where she frequents Azeroth on a regular basis.