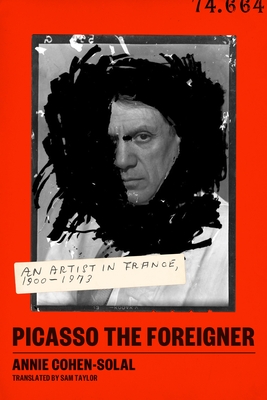 Born from her curated exhibition of Pablo Picasso’s work in Paris, biographer Annie-Cohen Solal’s Picasso the Foreigner presents a bold new understanding of the artist’s tempestuous relationship with his adopted homeland: France.

Winner of the 2021 Prix Femina Essai

Before Picasso became Picasso—the iconic artist now celebrated as one of France’s leading figures—he was constantly surveilled by the police. Amidst political tensions in the spring of 1901, he was flagged as an anarchist by the security services—the first of many entries in what would become an extensive case file. Though he soon became the leader of the cubist avant-garde, and became increasingly wealthy as his reputation grew worldwide, Picasso’s art was largely excluded from public collections in France for the next four decades. The genius who conceived Guernica as a visceral statement against fascism in 1937 was even denied French citizenship three years later, on the eve of the Nazi occupation. In a country where the police and the conservative Académie des Beaux-Arts represented two major pillars of the establishment at the time, Picasso faced a triple stigma—as a foreigner, a political radical, and an avant-garde artist.

Picasso the Foreigner approaches the artist’s career and work from an entirely new angle, making extensive use of fascinating and long-understudied archival sources. In this groundbreaking narrative, Picasso emerges as an artist ahead of his time not only aesthetically but politically, one who ignored national modes in favor of contemporary cosmopolitan forms. Cohen-Solal reveals how, in a period encompassing the brutality of World War I, the Nazi occupation, and Cold War rivalries, Picasso strategized and fought to preserve his agency, eventually leaving Paris for good in 1955. He chose the south over the north, the provinces over the capital, and craftspeople over academicians, while simultaneously achieving widespread fame. The artist never became a citizen of France, yet he enriched and dynamized its culture like few other figures in the country’s history. This book, for the first time, explains how.

Annie Cohen-Solal, a writer and social historian, is Distinguished Professor at Bocconi University in Milan, Italy. She has taught in Berlin, Jerusalem, New York, and Paris, and served as the cultural counselor to the French embassy in the United States. Her books include biographies of Jean-Paul Sartre, Leo Castelli, and Mark Rothko, all of which have been widely translated. Picasso the Foreigner was awarded the 2021 Prix Femina Essai; an exhibition curated by Cohen-Solal and based on the research for this book appeared in Paris at the Museum of the History of Immigration, in partnership with the national Picasso Museum, in 2021.

Sam Taylor has written for The Guardian, Financial Times, Vogue and Esquire, and has translated such works as the award-winning HHhH by Laurent Binet, and the internationally-bestselling The Truth about the Harry Quebert Affair by Joël Dicker.

"A beguiling read, as ingenious as it is ambitious. Follow Annie Cohen-Solal on her provocative 'treasure hunt' through the archives and into the unexpectedly intertwined histories of art, immigration, and surveillance, and see Picasso and Paris shimmering with new light." —Mark Braude, author of Kiki Man Ray: Art, Love, and Rivalry in 1920s Paris

"This inspired and innovative biography demonstrates that Picasso’s visionary approach to art was fundamentally shaped by his experience of being a 'foreigner' in France. Once you have read it, you’ll never see his work the same way again." —Lauren Elkin, author of Flâneuse

"A hitherto-unfamiliar, migrant, unassimilable, recalcitrant Picasso whose ever-rebellious spirit never succumbed to the glory of his worldly success comes to life in Annie Cohen-Solal's magnificent and evocative biography of the artist. Picasso the Foreigner gives us a fresh perspective from which to view his oeuvre. Meticulously researched, it speaks to contemporary concerns about race, class, identity, exclusion, and radical forms of subaltern cosmopolitanism. A brilliant tour de force." —Dipesh Chakrabarty, professor of history at the University of Chicago and author of Provincializing Europe

"In our own frightening time of anti-immigration phobia, Annie Cohen-Solal's new book almost reads like a mystery novel. She is a relentless investigator, who probes Picasso's perilous journey from an unwanted hobo migrant in Montmartre to a prince of the avant-garde. This is a magical book." —Jerome Charyn, author of Big Red and The Secret Life of Emily Dickinson

"Annie Cohen-Solal is a life-historian in peak form. She captures Picasso’s multiple lives as he transcended borders and shattered genres—while suspected by France’s art establishment and surveilled by France’s police informers and snitches. Cohen-Solal’s Picasso was a worldly figure navigating a world of oftentimes cruel nationalism. Picasso the Foreigner is a remarkable work of art and an important work of research excavation." —Jeremy Adelman, Henry Charles Lea Professor of History at Princeton University

"Annie Cohen-Solal’s magnificent biography, deeply researched in French archives and attentive to the contributions of the social sciences, reveals a hitherto unknown Picasso whose artistic strategies and identities were informed by his status as a foreigner. Her work is a remarkable contribution not only to Picasso studies but also to the history of twentieth century France." —Peter Sahlins, professor of history emeritus at the University of California, Berkeley

"Picasso survived, thrived, and fed his creativity by using his foreignness strategically to advance his aesthetic and political causes in France, Spain, and internationally. He simultaneously was shaped by and challenged the worlds in which he lived. Delving into letters and records and engaging in deep investigations no one else has, Cohen-Solal offers a stunning indictment of the French establishment, from its police to its academies, while also presenting a complex picture of a genius, his friendships, his politics, and his art. This tour de force offers a new and revelatory portrait of Picasso." —Margaret Levi, professor of political science at Stanford University

"Annie Cohen-Solal's fascinating inquiry, via history and sociology, has produced a true polyfocal book and a conceptual revolution on the Picasso narrative. With the new horizons that she opens up, we get the revisited image of a genius who was long perceived through an artistic prism only." —Laurent Le Bon, president of the Centre Pompidou, Paris