Troublesome Young Men: The Rebels Who Brought Churchill to Power and Helped Save England (Paperback) 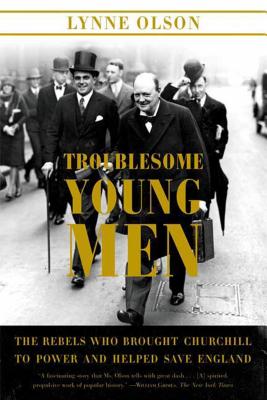 On May 7, 1940, the House of Commons began perhaps the most crucial debate in British parliamentary history. On its outcome hung the future of Prime Minister Neville Chamberlain's government and also of Britain—indeed, perhaps, the world. Troublesome Young Men is Lynne Olson's fascinating account of how a small group of rebellious Tory MPs defied the Chamberlain government's defeatist policies that aimed to appease Europe's tyrants and eventually forced the prime minister's resignation.

Some historians dismiss the "phony war" that preceded this turning point—from September 1939, when Britain and France declared war on Germany, to May 1940, when Winston Churchill became prime minister—as a time of waiting and inaction, but Olson makes no such mistake, and describes in dramatic detail the public unrest that spread through Britain then, as people realized how poorly prepared the nation was to confront Hitler, how their basic civil liberties were being jeopardized, and also that there were intrepid politicians willing to risk political suicide to spearhead the opposition to Chamberlain—Harold Macmillan, Robert Boothby, Leo Amery, Ronald Cartland, and Lord Robert Cranborne among them. The political and personal dramas that played out in Parliament and in the nation as Britain faced the threat of fascism virtually on its own are extraordinary—and, in Olson's hands, downright inspiring.

Lynne Olson, former White House correspondent for The Sun (Baltimore), is the author of Freedom’s Daughters, and co-author, with her husband, Stanley Cloud, of A Question of Honor and The Murrow Boys. She lives in Washington, D.C.

“[A] riveting book . . . Olson tells her story with verve, never letting the reader forget what was really at risk--and what might have happened if these particular troublemakers hadn't been so willing to stir the political pot.” —The Atlantic Monthly

“During the 1930s, as the rise of Nazism threatened western civilization, Winston Churchill's was a lonely voice warning of the coming danger, opposing the British government's policy of appeasement and urging immediate rearmament. Lonely, but not entirely alone. For a few younger Tory members of Parliament held similar views about the German threat, though they did not necessarily agree with Churchill on other issues. The odds were against them, and in attacking their own party's leaders they put their careers at risk, but in the end they and their allies prevailed: Neville Chamberlain and his defeatist government were overthrown, opening up the room at the top that Churchill so famously filled. Lynne Olson has seized upon their wonderful but neglected story and has told it with verve. It is a riveting tale, immensely readable, that brings to history the excitement of a novel.” —David Fromkin, author of Europe's Last Summer