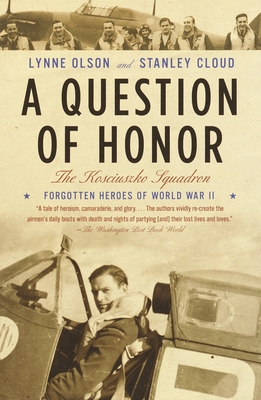 A Question of Honor is the gripping, little-known story of the refugee Polish pilots who joined the RAF and played an essential role in saving Britain from the Nazis, only to be betrayed by the Allies after the war.

After Poland fell to the Nazis, thousands of Polish pilots, soldiers, and sailors escaped to England. Devoted to liberating their homeland, some would form the RAF’s 303 squadron, known as the Kosciuszko Squadron, after the elite unit in which many had flown back home. Their thrilling exploits and fearless flying made them celebrities in Britain, where they were “adopted” by socialites and seduced by countless women, even as they yearned for news from home. During the Battle of Britain, they downed more German aircraft than any other squadron, but in a stunning twist at the war’s end, the Allies rewarded their valor by abandoning Poland to Joseph Stalin. This moving, fascinating book uncovers a crucial forgotten chapter in World War II–and Polish–history.

“Exciting. . . . A tale of heroism, camaraderie and glory. The authors vividly re-create the airmen’s daily bouts with death and nights of partying, their lost lives and loves.” —The Washington Post Book World

“An impassioned, riveting account of Poland’s betrayal by Britain and the United States, which quickly forgot the Poles’ heroism in their rush to appease the Soviet Union.” —Newsweek

“Exciting and compelling, a fine story too rarely told, a tribute to the Polish fighting spirit, and a well-written war history about a distant but very good neighbor.” —Alan Furst