I Am the Messenger (Hardcover) 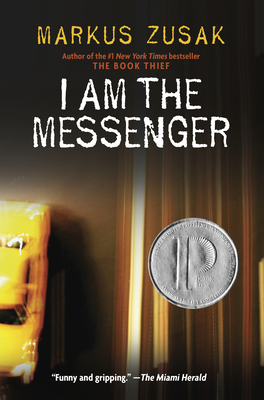 
From the author of the extraordinary #1 New York Times bestseller The Book Thief, I Am the Messenger is an acclaimed novel filled with laughter, fists, and love.


Ed Kennedy is an underage cabdriver without much of a future. He's pathetic at playing cards, hopelessly in love with his best friend, Audrey, and utterly devoted to his coffee-drinking dog, the Doorman. His life is one of peaceful routine and incompetence until he inadvertently stops a bank robbery.

That's when the first ace arrives in the mail. That's when Ed becomes the messenger. Chosen to care, he makes his way through town helping and hurting (when necessary) until only one question remains: Who's behind Ed's mission?

Markus Zusak is the international bestselling author of six novels, including The Book Thief and most recently, Bridge of Clay. His work is translated into more than forty languages, and has spent more than a decade on the New York Times bestseller list, establishing Zusak as one of the most successful authors to come out of Australia.
All of Zusak’s books – including earlier titles, The Underdog, Fighting Ruben Wolfe, When Dogs Cry (also titled Getting the Girl), and The Messenger (or I am the Messenger) – have been awarded numerous honors around the world, ranging from literary prizes to readers choice awards to prizes voted on by booksellers.
In 2013, The Book Thief was made into a major motion picture, and in 2018 was voted one of America’s all-time favorite books, achieving the 14th position on the PBS Great American Read. Also in 2018, Bridge of Clay was selected as a best book of the year in publications ranging from Entertainment Weekly to the Wall Street Journal.
Markus Zusak grew up in Sydney, Australia, and still lives there with his wife and two children.

“Funny and gripping.” —The Miami Herald

“Both serious and funny, touching and exciting.” —The Salt Lake Tribune