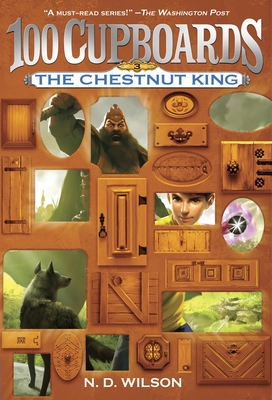 This is book number 3 in the The 100 Cupboards series.

The bestselling and highly acclaimed 100 Cupboards series concludes with one final, epic battle in The Chestnut King. Perfect for readers who love Percy Jackson, the Unwanteds, and Beyonders!

Hidden cupboards behind Henry’s bedroom wall unlocked portals to other worlds that Henry and his cousin Henrietta couldn’t resist exploring. But they made one terrible mistake—they released the undying witch Nimiane. Her goal? To drain all life from every world connected to the cupboards. Henry must seek out the Chestnut King to defeat her, but doing so will force Henry to make a terrible, irreversible choice. With the fate of the worlds and everyone Henry loves hanging in the balance, will he have the courage to do what is needed to destroy the witch once and for all?

N. D. WILSON lives and writes in the top of a tall, skinny house only one block from where he was born. But his bestselling novels, including the highly acclaimed 100 Cupboards series, have traveled far and wide and have been translated into dozens of languages. He and his wife have five young storytellers of their own, along with an unreasonable number of pets. You can visit him online at ndwilson.com.

"This is my favorite kind of fantasy, combining the secret and the ordinary." —Tamora Pierce, New York Times bestselling author

"One of the most fascinating new fantasy worlds grown on American soil since Oz." —MuggleNet.com

"Henry becomes a stronger and more resourceful kid as he tests his mettle against the creatures in the cupboards." —The Bulletin

"The story is chilling, but the creepy quotient never exceeds the book’s target audience." —Booklist