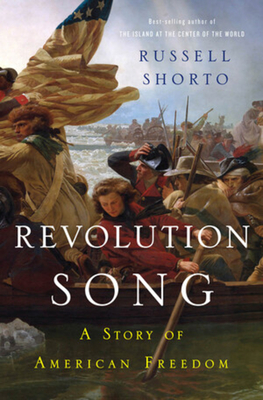 By Russell Shorto
$32.42
Not Available

From the author of the acclaimed history The Island at the Center of the World, an intimate new epic of the American Revolution that reinforces its meaning for today.

In his epic new book, Russell Shorto takes us back to the founding of the American nation, drawing on diaries, letters and autobiographies to flesh out six lives that cast the era in a fresh new light. They include an African man who freed himself and his family from slavery, a rebellious young woman who abandoned her abusive husband to chart her own course and a certain Mr. Washington, who was admired for his social graces but harshly criticized for his often-disastrous military strategy.

Through these lives we understand that the revolution was fought over the meaning of individual freedom, a philosophical idea that became a force for violent change. A powerful narrative and a brilliant defense of American values, Revolution Song makes the compelling case that the American Revolution is still being fought today and that its ideals are worth defending.

Russell Shorto is the best-selling author of The Island at the Center of the World, Amsterdam, and Revolution Song, and a contributing writer at the New York Times Magazine. He lives in Cumberland, Maryland.

Shorto’s achievement is a remarkable one. The intertwined stories of Revolution Song give a sense of how far-reaching a phenomenon the War of Independence was. It leaves to readers the pleasure of judging what each of the figures in the book—or perhaps the combination of them all—contributed to an event that changed the world.

Russell Shorto’s engaging new book appears at a moment when basic concepts of rights and equality are routinely disparaged. As if in response to our troubled political culture, he invites readers to return to the American Revolution to understand better how an 18th-century commitment to freedom took root and became a fundamental, unifying value in our nation’s history. . . . [Shorto has] produced a compelling work that reads almost like a good detective story. . . . Shorto deserves praise for reminding us of the complexity of freedom’s claims.
— Brian Greer - American Scholar

How did the teenaged daughter of a British officer view the American Revolution, from behind enemy lines in New York? What did that contest mean to a shrewd, contemplative Iroquois warrior? Russell Shorto has emerged from the archives with a bold, largely neglected cast. He has set them free in a rich, prismatic narrative, as intensely vivid as it is seamlessly constructed.
— Stacy Schiff, Pulitzer Prize–winning author of The Witches: Salem, 1692

Brilliant, captivating and fast-paced, Revolution Song is a wonderfully original take on the American Revolution that reads like a thriller. I couldn’t put this book down.

With symphonic sweep, cinematic detail and compelling, superbly researched real-life characters, Shorto shows how our struggle for freedom began and why it remains so sadly unfinished. If Spielberg wrote history, this is how it would read.
— Howard Fineman, NBC News analyst and author of The Thirteen American Arguments

Amazing: Russell Shorto shows us what a diverse, fascinating, cosmopolitan place this country has been since its founding.
— Charles C. Mann, author of 1491

Russell Shorto has long had an astonishing talent for adjusting the focus in ways that make familiar swaths of history seem intriguingly foreign and fresh. With Revolution Song, he’s worked his magic again. Through his vigorous language, his mastery of archival sources and the pleasing interweave of his six carefully chosen characters, Shorto has composed a powerful polyphonic story, simultaneously grand and intimate, that makes us hear (and see and feel) the tumult of our nation’s founding as never before.

— Hampton Sides, New York Times best-selling author of In the Kingdom of Ice