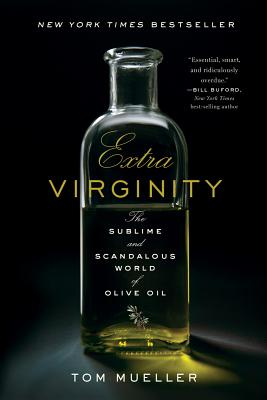 "[Mueller reveals] the brazen fraud in the olive oil industry and [teaches] readers how to sniff out the good stuff." —Dwight Garner, New York Times

For millennia, fresh olive oil has been one of life’s necessities—not just as food but also as medicine, a beauty aid, and a vital element of religious rituals. But this symbol of purity has become deeply corrupt. A superbly crafted combination of cultural history and food manifesto, Extra Virginity takes us on a journey through the world of olive oil, opening our eyes to olive oil’s rich past as well as to the fierce contemporary struggle between oil fraudsters of the globalized food industry and artisan producers whose oil truly deserves the name "extra virgin."

Tom Mueller’s previous book with Norton, Extra Virginity: The Sublime and Scandalous World of Olive Oil, was a New York Times bestseller. His writing has appeared in the New Yorker, the New York Times Magazine, and the Atlantic, and is anthologized in The Best American Science and Nature Writing. He divides his time between the Pacific Northwest and Italy.

Tom Mueller is, in turn, chemist, explorer, scholar and bard, infusing the narrative with a sense of wonder.
— Times Literary Supplement

In covering an industry that has its heroes and villains, author Tom Mueller does a splendid job of sorting out the players and demystifying the product.
— Russ Parsons - Los Angeles Times

Extra Virginity may make you reconsider the extra you’re paying for 'extra.'

Passionately written yet clear-headed…Mueller builds a convincing case for olive oil as one of the most miraculous and versatile substances in all of nature.
— Jerry Shriver - USA Today

Mueller does for his subject what Susan Orlean did for orchids.
— Columbus Dispatch

[Extra Virginity] does for olive oil what Eric Schlosser’s Fast Food Nation did for hamburgers. Mueller traces the history of this valuable product from antiquity to the present, but the really disturbing part is his exposé of the inferior quality control and outright fraud among today’s oil producers.