The Kid in the Red Jacket (Paperback) 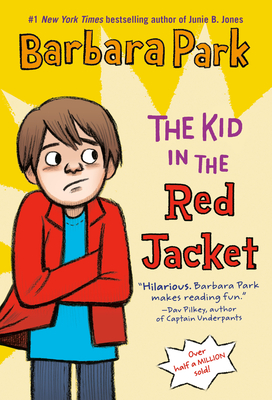 If you thought Junie B. Jones was FUNNY—catch more laughs from New York Times bestselling author Barbara Park with her hilarious middle-grade novels—just right for fans of Diary of a Wimpy Kid and I Funny!

Can Howard SURVIVE life without friends?
Howard Jeeter’s parents have ruined his life. They’ve moved him across the country, and all the kids in his new town act like he’s totally invisible. At least, all of them except for his six-year-old neighbor, Molly Vera Thompson. Howard could use a friend. But a little girl who talks nonstop? Not what he had in mind. Still, when you’re really lonely, you’ll be friends with anyone…right?

* “Park writes in a witty and bittersweet style about the awkward, supersensitive age of early adolescence. Another first-rate addition to the middle-grade popular reading shelf.” —School Library Journal, Starred

BARBARA PARK is beloved by millions as the author of the wildly popular New York Times bestselling Junie B. Jones series, which has been translated into multiple languages and is a time-honored staple in elementary school classrooms around the world. She is also the author of award-winning middle-grade novels and bestselling picture books, including Skinnybones, Almost Starring Skinnybones, Mick Harte Was Here, and The Kid in the Red Jacket. Barbara died in 2013, but her legacy lives on in the laughter her books give to readers all over the world.