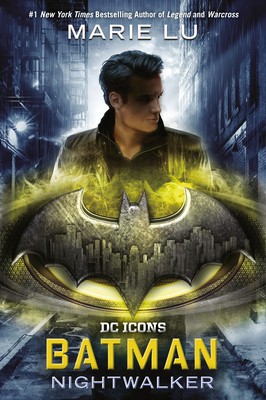 Before he was Batman, he was Bruce Wayne. A reckless boy willing to break the rules for a girl who may be his worst enemy.

The Nightwalkers are terrorizing Gotham City, and Bruce Wayne is next on their list. Bruce is turning eighteen and inheriting his family's fortune, not to mention the keys to Wayne Industries and all the tech gadgetry that he could ever desire. But on the way home from his birthday party, he makes an impulsive choice that leads to community service at Arkham Asylum, the infamous prison. There, he meets Madeleine Wallace, a brilliant killer with ties to the Nightwalkers. A girl who will speak only to Bruce. She is the mystery he must unravel, but is he convincing her to divulge her secrets--or is he feeding her the information she needs to bring Gotham City to its knees?

Bruce Wayne is proof that you don't need superpowers to be a super hero, but can he survive Madeleine's tense game of intrigue and deception?

Don't miss the rest of the DC Icons series! Read the books in any order you choose:

MARIE LU is the author of the bestselling Warcross, the #1 New York Times bestselling series The Young Elites, and the blockbuster bestselling Legend series. Visit her at marielubooks.tumblr.com and follow her on Twitter at @Marie_Lu. She is a DC Icons author, a series in which the DC Comics super hero icons are written by megastar young adult authors. The series also includes Wonder Woman: Warbringer by Leigh Bardugo, Catwoman: Soulstealer by Sarah J. Maas, and Superman: Dawnbreaker by Matt de la Peña.

"Masterful. . . . A great story for any Dark Knight fan."
—Den of Geek, (for Batman: Nightwalker by Marie Lu)

"A fast-paced story line, action-packed fight sequences, and hi-tech gadgetry expected from any Batman story make this a fun read with wide appeal."
—SLJ, (for Batman: Nightwalker by Marie Lu)

“The trickiest aspect of any Batman narrative is getting into Bruce Wayne's head, and [Lu] doesn't miss a beat. . . . An engaging character piece with enough Batman allusions to intrigue fans and newcomers alike.”
—Kirkus Reviews, (for Batman: Nightwalker by Marie Lu)

"Doesn’t merely survive the hype, it deserves it.” —The New York Times Book Review (for Legend)

"Lu opts for a high simmer of intrigue." —PW, Starred Review (for Prodigy)

"By permitting her characters some grand failures, she raises the stakes in the best way possible."—The New York Times Book Review (for The Young Elites)