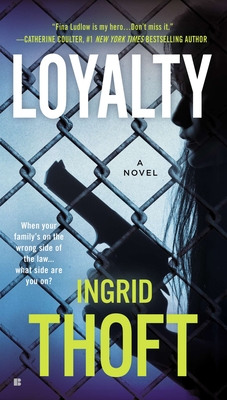 This is book number 1 in the A Fina Ludlow Novel series.

“Flunking out of law school was probably the best thing that happened to Fina Ludlow. Ludlow and Associates' most interesting work was not being done by their lawyers but by their lead investigator, Frank Gillis. So Fina learns her trade from Frank, taking over his role when he leaves the firm. Private investigation is an ideal fit for Fina: she can keep her own hours, roam the streets, and carry a gun. Discreet and devious, her favorite combination, gets her through a lot of doors, that and her skill with a lock pick. Fina's family loyalty was strong but even family can stretch the rules as well as the law. When her sister-in-law goes missing and her niece locks her bedroom door at night Fina has to decide which side she is on: family loyalty or the truth. Don't miss this debut novel by an author who actually has a degree in private investigation. Thoft has created a female detective who is tough, fair-minded, determined and possessing a biting sense of humor. Hopefully, Loyalty is the beginning of a gripping new series.”
— Karen Briggs, Great Northern Books and Hobbies, Oscoda, MI

When your family’s on the wrong side of the law…what side are you on?

The Ludlows are a family of fast-talking Boston lawyers, and patriarch Carl Ludlow treats his offspring like employees—which they are. Black-sheep daughter, Fina, dropped out of law school, but her father keeps her in the fold as the firm’s private investigator, working alongside her brothers.

Juggling family, business, cops and crooks is no problem for Fina. But when her sister-in-law disappears, she’s caught up in a case unlike any she’s encountered before.

Carl wants things resolved without police, but the deeper Fina digs, the more impossible that seems. As she unearths more dirt, the demands of family loyalty intensify. But she is after the truth—no matter where it lies…

Ingrid Thoft was born in Boston and is a graduate of Wellesley College. Her interest in the PI life and her desire to create a believable PI character led her to the certificate program in private investigation at the University of Washington. She lives in Seattle with her husband. Loyalty is her first novel.

“Loyalty’s Fina Ludlow is my hero. If I were in a bad spot, I’d want her at my back. Don’t miss it.”—Catherine Coulter, # 1 New York Times bestselling author

“In her debut novel, Ingrid Thoft gives us Fina Ludlow, the newest private eye to prowl Boston’s mean streets. Fina returns the female detective to the heart of the hard-boiled tradition: hard-drinking, hard-loving, moody. Writer Ingrid Thoft has given her a dysfunctional extended family that rivals the Ewings of Dallas fame, which adds a dimension not often seen in the PI novel.”—Sara Paretsky, New York Times bestselling author

“Loyalty, Ingrid Thoft’s strong debut, is gripping, and Fina Ludlow, the black sheep of her male-dominated family of ambulance chasers, elevates it to a must-read. A seductive combination of sass and smarts, Fina reminds us just how hard it is for women in a male-dominated world without ever giving an inch. Loyalty reminds me just how great a PI novel can be. This is the start of something big.”—Ridley Pearson, New York Times bestselling author

"What starts, in Thoft’s dazzling first novel, as a missing-persons case for Boston PI Fina Ludlow—the search for her sister-in-law, Melanie—swells through layers of familial secrets, lies, and betrayals to something approaching Greek tragedy....Readers will be eager to see more of smash-mouth Fina, a hard-boiled throwback equally comfortable shooting from the hip or the lip."
— Publishers Weekly (starred)

“(Fina) Ludlow has the shrewdness of her parents and siblings but she has compassion, too. Fans of the Kinsey Millhone mysteries will enjoy this engaging debut.”
—    Booklist